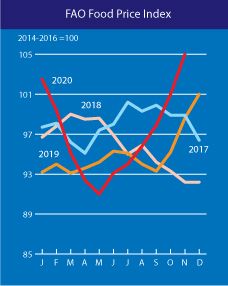 » The FAO Food Price Index* (FFPI) averaged 105.0 points in November 2020, up 4.0 points (3.9 percent) from October and 6.4 points (6.5 percent) higher than its value a year ago. The November increase did not only mark the biggest month-on-month rise since July 2012, but it also resulted in the index reaching its highest level since December 2014. All sub-indices of the FFPI registered gains in November, with the vegetable oil sub-index rising the most, followed by those of sugar, cereals, dairy and meat.

» The FAO Cereal Price Index averaged 114.4 points in November, up 2.7 points (2.5 percent) from October and as much as 19.0 points (19.9 percent) higher than its November 2019 value. The latest increase marked the fifth consecutive monthly rise in the value of the index. Wheat export prices continued to edge upwards in November, largely on a tightening outlook for export supplies and reduced harvest prospects in Argentina. Maize prices also rose further in November, supported by continued large maize purchases by China, amidst further cuts to this year’s production estimates in the United States of America and Ukraine, both major exporters. Among other coarse grains, firm demand continued to push up feed barley and sorghum prices. By contrast, international rice prices held steady in November, as support provided by tight availabilities and currency movements in selected South East Asian exporters was offset by limited demand and harvest pressure in other major origins. 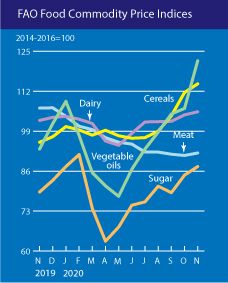 » The FAO Sugar price index averaged 87.5 points in November, up 2.8 points (3.3 percent) from October, representing the second consecutive monthly increase. The increase in international sugar quotations in November was mainly underpinned by firmer new data supporting earlier expectations of a global production shortfall in the 2020/21 marketing season. These expectations result from weaker crop prospects in the EU, Thailand and the Russian Federation, as unfavorable weather conditions had negatively impacted yields. Sugar prices also received further support in the aftermath of hurricane-damaged sugarcane crops and infrastructure in Nicaragua, Honduras and Guatemala.

*Effective July 2020, the price coverage of the FFPI has been expanded and its base period revised to 2014-2016. For more details on this revision, please see the feature article of the June 2020 issue of the Food Outlook. 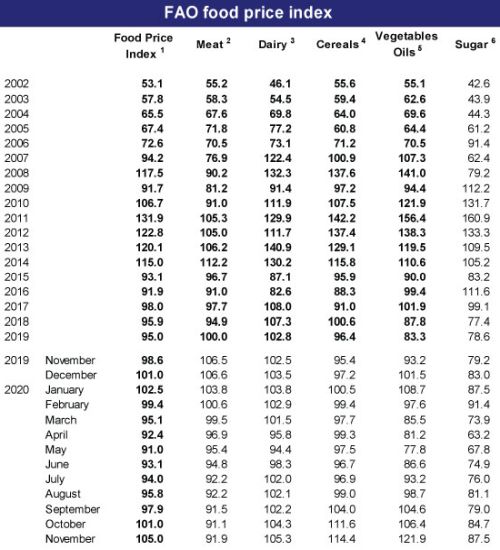