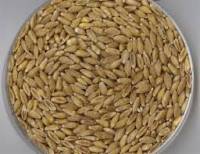 The new bread is described as a loaf with tritordeum flour milled on stone, liquid sourdough and malted tritordeum grain mixed into the dough. This not only gives a bit of bite but above all a very pleasant malt touch on the crumb and an extremely aromatic crust, the bakery describes.

Tritordeum differs from ordinary wheat in that it contains more digestible gluten and gives the bread a very specific taste and crumb color. Moreover, it contains more fibers, unsaturated fatty acids, and protein, the bakers explain.

The development of Tritordeum started in the late 70s, by a group of researchers from the Institute of Sustainable Agriculture (IAS) of the Consejo Superior de Investigaciones Científicas (CSIC) in Córdoba. Its name is a combination of the name of its parent seeds in Latin: Triticum durum (Durum wheat) and Hordeum chilense (Wild barley).

After 30 years of research, Agrasys launched Tritordeum on the market in April 2013. Tritordeum has been developed by the traditional breeding technique of hybridization, which is why it does not fall into the genetically modified organism (GMO) category.

In terms of bread making, bakers usually compare it with standard wheat, the cereal of reference and most widely cultivated worldwide. However, Tritordeum is not a new wheat variety, but a new crop with its own rheological, nutritional and organoleptic properties, according to the producer.