Who wants to eat bread in this sweltering heat? Fortifying bread is something more applicable to the winter months of the year while summer is best spent at the beach or the pool with an ice-cold slice of juicy watermelon, right? Wrong!

Few breads are especially suited to our hot, Mediterranean climate, but one country has perfected a light, summery bread – Italy – and it is called the ciabatta.

Italian baking tradition has deep roots, beginning with ancient Egypt and continuing with the Romans. Ironically, however, the ciabatta was not the fruit of this ancient tradition but rather a response to the French baguette in the 1980s. Intimidated by the baguette’s intrusion into Italy’s baking culture, Italian baker Arnaldo Cavallari decided to develop an Italian bread to rival the baguette, and the ciabatta was born. 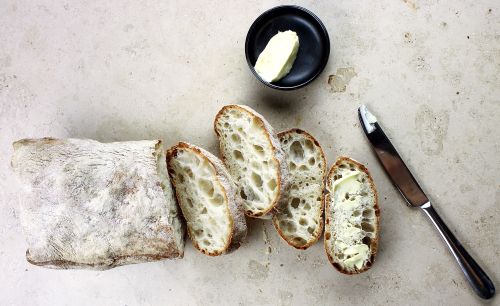 The ciabatta combines typical, traditional Italian baking techniques with a revolutionary, counterintuitive method of mixing dough.
Like much of traditional Italian baking, the ciabatta uses biga, a pre-fermented dough-mixing technique Italian bakers developed during the Industrial Revolution to replace sourdough. Biga, unlike sourdough which relies on wild yeast from the air, uses regular baker’s yeast, in minute amounts, to ensure a slow fermentation process and the development of complexity of flavor in the bread.

Everyone exalts the Mediterranean diet for its health benefits, a mainstay of which is olive oil. It is therefore not surprising that olive oil is also an integral part of the ciabatta.

Where the ciabatta bids farewell to traditional Italian baking, however, is in a new, counterintuitive method of mixing the dough. Perhaps inspired by the sweltering heat of the Mediterranean and the natural inclination to want to bathe in cold water, Cavallari decided to “bathe” the dough in prodigious amounts of water. In regular breads, the ratio of water to flour (hydration factor) is 65%. In ciabatta the ratio is 75%, which results in a very soft, sticky dough somewhere between pancake batter and bread dough.

You have to resist the natural instinct to add extra flour when mixing this amorphous, sticky concoction and endure 10 minutes of kneading that seem to be going nowhere, as the dough does not “tighten up” like regular dough and become silky-smooth and elastic.

After rising, ciabatta dough is little improved in consistency from when it was kneaded, and because of its watery consistency defies traditional shaping techniques. The only thing you can really do with such soft dough is to flour your hands well, reach in and grab a sticky clump and using both hands, stretch it into something resembling a rectangular shape and lay it down on a baking tray. I say “resembling” a rectangle, because achieving a rectangle is highly optimistic and takes some experience and skill. Most of my first efforts resembled a dinosaur appendage and progressed to something that looked initially like a tree log. After a while, when the dough rises and settles, however, it starts to look a little like a slipper, and that is where the bread got its name. Ciabatta in Italian means slipper.

The bread is then baked in a very hot oven.

Your persistence in preparing this bread will be amply rewarded, as the result is a light, airy, spongy bread, with a unique texture, an intoxicating hint of olive oil and a slightly nutty taste from the biga.

The ciabatta has become the standard Italian daily bread, just like the baguette in France, but in my humble opinion, the ciabatta surpasses the baguette both in texture and flavor. In Israel, they have something called a “jepeta,” which people mistake for Italian ciabatta, but is nothing close. The slang term “jepeta” here has become synonymous with a bread “sandwich.”
Cavallari, a highly skilled baker who was able to think “out of the box,” has created what is perhaps the perfect bread for hot summers.