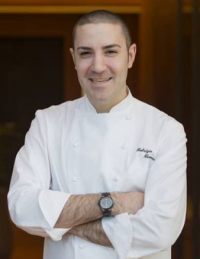 Tokyo-based patissier Fabrizio Fiorani, who was named Asia’s Best Pastry Chef at the Asia’s 50 Best Restaurants awards ceremony in Macau on March 26, has always loved tiramisu, the Italian confection of coffee-soaked sponge cake layered with sweetened mascarpone cheese and cocoa powder. It was the first dessert he learned to make, at the age of 14, while working at a gelato shop in his native city of Rome, and it’s still the treat he craves most at the end of a long day.

At Bulgari Il Ristorante Luca Fantin, where Fiorani has been the head pastry chef since 2015, some of his most delightful creations are humorous (tiramisu translates, roughly, as “cheer me up”) riffs on the dish. Once, he presented it as a glazed cookie precisely cut into the shape of Italy — including the islands of Sardinia and Sicily — alongside a chocolate truffle filled with coffee ganache.

Another time, it came in the form of edible letters spelling out “tiramisu.” More recently, he turned it into a pair of faux Groucho Marx glasses, perched atop a red plastic nose and served with mascarpone gelato. The “glasses” were coffee-flavored biscuits dotted with mascarpone cream and covered with a delicate layer of chocolate; he found the plastic nose at a ¥100 discount shop.

“I’m sure that by the end of the meal you’re not hungry. Still, I want to entice you, and the best way to touch someone is with a smile,” he says.

While his compositions are whimsical, the flavors are, in keeping with executive chef Luca Fantin’s philosophy of using Japanese produce to reinterpret classic Italian recipes in a modern way, “100 percent Italian.”

Fiorani, 32, has a closely shaven cap of dark brown hair and a jokey manner that belies the seriousness with which he approaches his craft. He began cooking in Michelin-starred restaurants when he was 17. Later, he spent 10 years working with Heinz Beck at three-Michelin-starred La Pergola, in Rome, before he was offered the chance to help launch Heinz Beck Tokyo, which opened in the capital five years ago. The following year, he joined Bulgari Il Ristorante Luca Fantin, where he oversees pastry.

Visual impact and purity of flavor define Fiorani’s style, which he describes as “lighter than traditional French pastry,” since he uses less sugar and cream.

“You start eating with your eyes and then your sense of smell. Taste is the last story. But if the visual (presentation) is not related to the ingredients, it has no meaning,” he explains.

For his Raspberry Splash, Fiorani uses a magnetic stencil to paint an image of the fruit on a disc of white chocolate, which conceals a trio of raspberry confections. A kabocha pumpkin tart, with cubes of amaretto jelly and burnt butter ice cream, comes crowned with crispy wafers shaped like autumn leaves.

The signature dish, Latte, that he’s been perfecting for the past year is a meditation on raw milk from Hokkaido — it’s presented as a gelato, encased in a smooth mousse and then topped with a flurry of milk granita, under a veil of vanilla-scented sugar glass. The dish, he says, is meant to evoke “childhood memories” linked to “mother’s milk, the first flavor.”

When we meet on a recent afternoon, I arrive 30 minutes late and in a bad mood. I’m not a sweets person, but I accept when Fiorani offers me a dish of the Latte dessert. It manages to be impossibly light and deeply satisfying, familiar and yet intriguing. As I scoop up the last bite of gelato, I can feel the fog of my grumpiness lifting. All that remains — at the bottom of the bowl and in my mind — is the sweet residue of fleeting pleasure.

“I can’t save the world with my desserts, but I can give our guests 20 minutes of happiness,” Fiorani says with a wink.

For Fiorani, the Best Pastry Chef prize represents a victory for contemporary Italian cuisine: “My goal is to create a unique experience of Italian pastry. This award is a recognition of the entire team at Il Ristorante Luca Fantin and the effort that goes into making our guests happy every day,” he says.