Barry Callebaut and Nestlé have partnered together for a world first – Japanese KitKat is the first consumer brand to launch a Ruby chocolate version named KitKat Chocolatory Sublime Ruby. As of tomorrow (January 19), Nestlé Japan Ltd. will launch the Ruby chocolate version of its iconic KitKat brand in KitKat Chocolatory stores in Japan and South Korea, as well as online, and according to Barry Callebaut, this means it will be available in more countries.

KitKat is the first to offer this fourth type of chocolate to consumers, just five months after Ruby chocolate was first launched by Barry Callebaut in September 2017. You can read FoodIngredientsFirst coverage from Shanghai here. 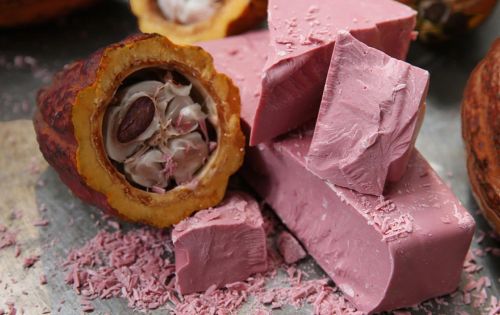 Speaking to FoodIngredientsFirst, Christiaan Prins, Head of External Affairs at Barry Callebaut, said: “With Ruby chocolate being launched just five months ago and now already having a brand adopt and bring it to the market is extremely exciting. The Nestlé team in Japan and South Korea were the quickest to catch onto this trend. With the launch being in Shanghai last year, which could well be why there is an extra appetite from Asian countries. But ultimately, it’s about who is the quickest to adapt and integrate Ruby into their brands, and this case it was Nestlé in Japan and Korea.”
Prins believes the color of Ruby chocolate appeals to a broad group of people, and the flavor, in particular, appeals to millennials, he says.
The Nestlé deal is exclusive for a limited time, initially for six months, but Barry Callebaut is confident about the future of Ruby chocolate. Prins adds: “Barry Callebaut’s gourmet brands are also looking at launching it in the first half of 2018, so we can expect that it will become much more visible in the coming months, on the market.”
Since the announcement in Shanghai, China, on September 5, 2017, Ruby chocolate has been attracting strong interest from chocolate connoisseurs throughout the world. The Ruby chocolate used in KITKAT Chocolatory Sublime Ruby has a fresh berry-fruity taste and characteristic color. Ruby chocolate is made from the Ruby cocoa bean. No berries, berry flavor nor color are added. The bean has a specific set of attributes, which Barry Callebaut managed to unlock through an innovative process that took many years to develop.
Also speaking with FoodIngredientsFirst, Sandra Martinez, Nestlé Global Head of Confectionery said: “KitKat is one of our leading confectionery brands that have a unique mix of heritage and innovation. It was first manufactured in 1935 and since then has been delighting consumers all over the world with its breakthrough innovation.”
In Japan, there are more than 350 different products in a large variety of flavors. KitKat Chocolatory in Japan was also specifically selected for the affinity between its position as the most luxurious line among the world-popular KitKat Made in Japan brand and the innovation of Ruby chocolate, she says.
“The market for KitKat in Japan is mature and consumers are keen to try new and interesting flavors – that makes it a natural choice for us to launch KitKat Chocolatory Sublime Ruby in Japan.” “Our strategy is to continue delighting consumers with the best possible products, solutions and services. We are happy to share more news with you once it becomes available,” Martinez notes.
“Sublime Ruby” was created through the craftsmanship of top pâtissier Yasumasa Takagi. It will be available for purchase in the KitKat Chocolatory stores as well as online. KitKat Chocolatory is a specialty store in Japan and South-Korea selling premium KitKat chocolates created with meticulous attention to ingredients and preparation methods under the direction of Yasumasa Takagi, owner-chef of Le Pâtissier Takagi.
Antoine de Saint-Affrique, CEO of Barry Callebaut commented: “I am very pleased that our innovative breakthrough Ruby chocolate has come to life so quickly through our partnership with Nestlé and the pioneering KitKat Brand in Japan. Nestlé was very quick in spotting the trend and in introducing a Ruby chocolate version of KitKat, which will entice consumers across Asia and beyond.”
‘KitKat Chocolatory Sublime Ruby’ will be available from Friday, January 19, in time for Valentine’s Day.
• KitKat Chocolatory Sublime Ruby 1 piece: 400 JPY (US$3.59)
• KitKat Chocolatory Sublime Valentine’s Assortment 5 pieces: 1,800 JPY (US$16.18)
• KitKat Chocolatory Sublime Valentine’s Assortment 7 pieces: 2,400 JPY  (US$21.57)
Source: foodingredientsfirst.com