France achieved first place in the 2017 edition of the Coupe de Monde de la Pa?tisserie contest – the international reference event in the trade created in 1989 by Gabriel Paillasson its president founder. Among the 22 teams composed of 3 specialists (sugar, chocolate, ice- cream) from 4 continents, the team from France completed a flawless run in 10 hours of tests, followed by Japan and Switzerland. 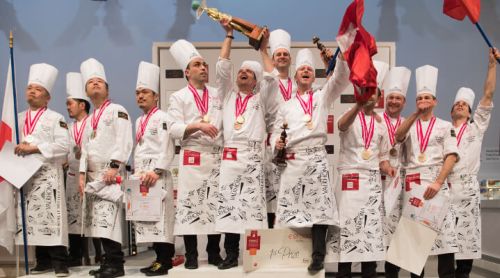 The Vase de Se?vres – a prize donated by the President of the French Republic and awarded to the country that scored the most points for the degustation – was award to France

France obtains the trophy like in 2013, thanks to a great teamwork and tasting grades that made the difference. Japan definitely takes its habits in the top 3, and proves its regularity among the best pastry nations. After years of absence, Switzerland steps on the podium for the first time and creates surprise after the wild card obtained at the Coupe Europe selection in January 2016.

Gabriel Paillasson, founding president of the Coupe du Monde de la Pa?tisserie, is very satisfied with the contest: « All nations, even the less experienced ones, did a fantastic job. It was a magnificent event with an amazing atmosphere that reflects pastry’s evolution in the world. “