It never fails. Every three years, when confectionery equipment suppliers greet customers and newcomers to their booths at interpack, the first question that surfaces is, “What’s new?”

When you are a company like Chocotech, which produces a complete range of equipment for candy manufacturing, it’s difficult to know where to begin.

Considering that the Wernigerode, Germany-based company has complete systems for caramels, jellies, hard candies, fondants, chewies, fudges and aerated masses, as well as barline kitchens, one can begin to appreciate the depth and breadth involved. 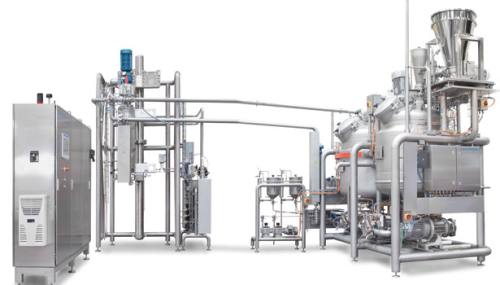 But it’s always best to start at the beginning, and caramel certainly provides a good starting point.

At this year’s interpack, in hall 3, booth A07, Chocotech will display its batch and continuous caramel cookers such as Carastar, YPP and Sucrofilm. The Sucrofilm 2000 with a heat exchange surface of 6 square meters represents one of the company’s latest developments in this area.

The unit is designed for higher throughputs of up to 3,000 kg/hr depending on the recipe. This large-sized cooker rounds off the Sucrofilm family with units now available from 1 – 6 square meters.  All Sucrofilm cookers now include the maintenance-friendly, direct drive with various frequency control, which allows for more flexibility during production and Clean-In-Place (CIP) operations.

The Caraflex caramelizer will also be displayed showing the latest hygienically designed agitator. All of the company’s caramel kitchens are designed for multi-continuous production shifts before CIP is required and include milk hydration, ingredient weighing, mixing, dissolving, cooking, inline product reclaim, cooling and rework processing.

When it comes to jellies, Chocotech points to the Jellymaster for efficient production. One of the most important factors is consistent viscosity, especially for one-shot products, which are becoming more and more popular in the market place.

The Sucrotwist Dissolver is designed for longer continuous production runs and can handle all gelling agents such as gelatin, starch, agar agar, gum Arabic, carrageenan and pectin. Visitors to the booth will also have the opportunity to see the Jellymix unit, which is a gravimetric weighing and feeding system that can accommodate up to eight different colors and flavors. The system can also handle aerated foam and other additions such as fruit juice. It is also suited for the addition of active ingredients.

Chocotech also supports the IQ, OQ & PQ documentation for pharmaceutical applications. Volumetric metering of CFA will also be on display.

As for hard candy, the Sucromaster comes with two dynamic mixers for two colors/flavors and a newly designed hygienic tempering belt. It will be paired at the booth with a complete hard candy forming line from Euromec, Chocotech’s partner for forming. The hard candy kitchen is also designed for laminated, center-filled, caramelized, sugar-free, aerated, layered (multi-colour) and medicated hard candy.

The line also includes the company’s successful and patented energy-saving dissolving system, the Ecograv, which allows the process to be started at 90 percent dry solids, thus saving up to 50 percent on steam costs compared to conventional production processes.

Candy manufacturers involved in producing fondants need to take a look at the Micron, which can produce items ranging from very fine grained fondants to coarser fudges. The exact super saturation of the mass before beating allows for very precise crystallization, resulting in controllable mass fineness and distribution.

Precise temperature control of the mass discharge temperature for next-step processing is also part of the system. The newly developed, PLC-controllable water tempering units with CIP capability rounds off this closed hygienically designed system. The unit is also suitable for sugar-free masses.

In addition, the company will have various systems for the continuous production of chewy candy such as fruit, milk, caramelized and powder/liquid filled chews on display. Continuous crystallization methods can also be viewed at the booth.

Barline kitchens for batch and continuous cooking to complement the Sollich Conbar lines will also be on display, including theTornado for continuous aeration and theTurbowhip for batch aerating.

Chocotech’s Chocolate Division will also have a full complement of machinery to display,  including a Frozenshell line with a Pralimat depositor  and a Sollich Rework Temper, which will run with chocolate throughout the show.

The line will also run for periods in the mornings with a Chocoform PSL  (drop line) unit for lentils.

The Chocoform PSL, which is designed for a quick roll-in roll-out product format change, is ideal for manufacturing chocolate centers such as lentils, balls and eggs,  which would then go on to be panned. The latest design includes pre-cooling (patent pending) of the chocolate mass before it enters the forming rollers, which increases throughput by over 50%.

For more information, visit www.chocotech.de; at interpack, stop by hall 3, booth A07.