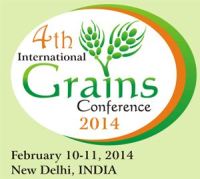 A lineup of speakers from India and around the world will share their expertise and look to the year ahead. In the price outlook session, experts will forecast prices for a range of commodities including wheat, pulses, oilseeds and sugar.

Theme of the Conference

After three successive years of adverse weather and spike in prices in 2010, 2011 and 2012 that affected a large number of poor people and food importing countries really badly, the global agricultural markets have recovered in 2013 with production of various crops including grains and oilseeds rebounding, thanks to generally favourable weather in both the hemispheres. Prices have turned more benign.

As we move closer to the end of 2013 and beginning of 2014, the big question on the minds of market participants is: what does 2014 have in store? The growth v/s inflation dilemma refuses to go away, even as countries struggle to strike a judicious balance. Will adverse weather once again hurt crop output or will production respond to prices? What role will monetary policy play in impacting production and prices of farm goods? Crude oil has become a critical driver of agricultural markets. How will crude prices behave in 2014? These and many more questions engage the attention of market participants and policymakers around the world.

In India, 2013 saw a general rebound in farm production; yet extended southwest monsoon has damaged a part of kharif crop. Rabi planting is set to gather pace over November. Will the next harvest (Rabi 2014) compensate for kharif losses, and to what extent? In other words, will the country continue to face elevated levels of food prices or will there be relief?

The National Food Security Act 2013 has been passed. What are its implications for the country’s farm sector in general and grains market in particular? What is the future of Futures Trading in India? Will the extant suspension of derivatives trade in some agricommodities be lifted? Will FDI in organized retail revolutionise the domestic food market? How will currency dynamics impact India’s imports of edible oil and pulses in particular?

These and many more related questions will be debated with tremendous insight by renowned experts at the 4th National Grains Convention to be held in New Delhi during february 10-11, 2014. A strong lineup of speakers from within the country and outside will share their domain expertise and crystal-gaze into the year ahead.

The high point of the convention would the Price Outlook session where experts will come up with price forecast for a range of agri-commodities including wheat, pulses, oilseeds and sugar.