While new legislation has been designed to reduce food safety failures, state-of-the-art spraying and washing equipment is helping food and beverage

Spraying and washing operations are vital not only to food and beverage production, but also to food safety. And with more attention being given to the latter because of recalls, deaths and illnesses related to failures, processors are becoming more vigilant and proactive. One area they’re concentrating on is hygiene. Without effective washing and spraying, food processing would come to a standstill.

Washing and spraying systems sanitize food, including freshly slaughtered meat and poultry, before further processing. They also provide a method to rinse, humidify and apply flavorings and other additives to a variety of food products as they pass from reception and production to packaging.

Mouth-watering breakfast buns are often coated with a delicate egg wash, maybe a dusting of powdered sugar glaze or cinnamon. These treatments are part and parcel of some very sophisticated spray equipment in a food production facility. 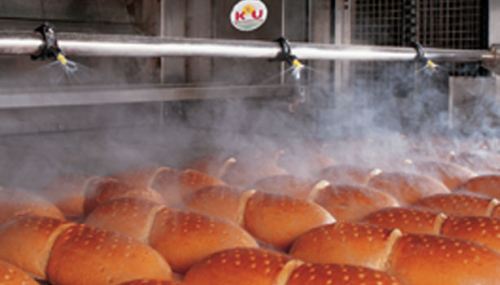 A Lechler pneumatic atomizing nozzle, such as the AirMist, can be used to apply water to prevent dehydration in foods. The AirMist combines air and liquid to create very fine droplets that produce a light mist required for applications such as in this bakery. Source: Lechler

Washing and spraying systems also are vital to cleaning plant equipment. Food products regularly get baked onto fryers, totes, carriers and other units. In many instances, food residue, such as tomato sauce, gets glued to mixing and heating vessels. Today’s modern nozzle and spray units are needed to clean production and storage vessels of all sizes, from one-liter to 4,000-gallon tanks. And they all need to be cleaned regularly and as quickly and efficiently as possible.

Up, down and sideways

Gamajet President Bob Delaney talks of the dramatic contrast between automated vs. non-automated systems of the past, some of which are still very much in use today. One, for instance, is simple manual cleaning, where a worker enters the tank (called confined space entry) with a high-pressure sprayer. “Some of these sprayers operate at 2,000 or 2,500psi and can be dangerous, especially when the worker has to get close to the cleaning surface,” he says.  “Further, a lot of tanks have sharp agitators that can cause serious cuts. For these reasons, the EPA and OSHA [Occupational Safety and Health Administration] require at least three people to be present—one to operate the pump, one to stand at the entrance to the tank and one to actually get in and clean the tank. This ends up being very time consuming and expensive.”

Another non-automated method is a boil out, which involves filling the tank with water and caustics and running it for a full eight-hour shift. “This, in itself, is inefficient and sometimes has to be repeated, using up even more time, chemicals and water in the process,” notes Delaney.

These factors led to the development of static spray balls to clean the inside of tanks instead. But the more difficult the residue, the more difficult it became for static units to effectively clean the tanks. The industry, in turn, developed rotary impingement machines that disperse water and cleaning agents, in the form of high-impact water jets, in a full 360° radius—up, down and sideways—that have since become widely used. “The latest rotary impingement machines can fit through very small tank openings,” says Delaney. “In the past, openings had to be a minimum 12 inches in size. Nowadays, rotary impingement machines like ours, whether installed directly into the hole or lowered into larger tanks with an extension pipe called a lance, can fit into openings as small as two inches.”

Choosing the right solution can provide huge benefits to users. One of Gamajet’s yogurt customers, for instance, switched from three static spray balls to two Gamajet A6 triple-nozzle rotary impingement machines and a bottom-mounted spray ball in one of its large fermentation tanks. As a result, it went from using 965 gallons to 232 gallons of water in a single cleaning cycle. It also reduced 3 percent CIP cleaning solution from 289 gallons to 70 gallons, and cycle time from six to three hours. In addition, the change eliminated the need for confined space entry.

Diana Lent, marketing manager at Lechler Inc., based in St. Charles, IL, says minimizing water use in every industry is a growing concern. “Manufacturers are also being required to have strict cleaning processes in place, which is why automated devices are becoming more in demand. Cleaning by hand is not always accurate or repeatable,” she says. “Automated spraying is not only safer, because workers don’t have to climb inside the tanks, it can also reduce cleaning time from three hours to 20 minutes while ensuring it [the cleaning solution] reaches all the points.”

Lechler offers a range of automated products. One is a spray bar or manifold, which uses several flat-fan or full-cone nozzles that can be removed or replaced by hand for cleaning, cooling or hydrating. The company also offers several tank cleaning nozzles for cleaning or CIP applications. Free-spinning tank cleaning nozzles, such as the stainless steel Whirly, are driven by fluid and pressure so they are used for removing products with a light to medium soil buildup. The flat-jet nozzles produce large droplets for maximum impact and run on low pressures up to 60psi. (Higher pressures usually produce smaller droplets resulting in lower impact and cleaning performance.)

Designed for difficult-to-remove soils, the Lechler XactClean controls the spray with an internal turbine and uses either low or high pressures ranging from 30 to 150psi with constant spray performance. The unit requires no maintenance.

The company’s VarioSpray II sprays small volumes of liquid and can be used for coating applications, such as coating trays with thin non-stick oils or food flavorings. Requiring no air, the VarioSpray II uses PWM (pulse width modulation), which employs an electronic pulsation signal to propel liquid within a timed cycle. This method, according to the company, cuts both liquid and energy costs by up to 50 percent, partly because compressed air isn’t needed.

Based in Greenfield, MA, BETE provides a variety of specialized nozzles and equipment for individual applications where shadowing—a term for hard-to-reach places in a tank or other food processing vessel—is a challenge. It offers three main lines of tank washing equipment: HydroWhirl-S (HWS) series of stainless steel rotating balls; HydroWhirl Poseidon (HWP) series, which has a similar rotating ball design as the HydroWhirl-S but is made entirely of Teflon; and HydroWhirl Orbitor (HWO) series, which is a rotating jet machine.

Noah Wallace, applications engineer at BETE, points out that the HWS and HWP series of nozzles include “reactionary force” driven by the cleaning fluid exiting the nozzles. This provides light-to-medium impact washes. In contrast, the HWO series is driven by the cleaning fluid flowing through an internal gear train, resulting in a slow, controlled rotation of the wash jets that concentrates the cleaning medium for high-impact cleaning and repeatable nozzle performance. “All our rotating tank wash units are media driven, self-cleaning and self-lubricated,” Wallace says.

One of BETE’s customers used a competitor’s stainless steel rotating unit with a single-bearing track rather than dual-bearing tracks utilized in the HWS series. “By switching to the BETE nozzles, the customer was able to achieve longer nozzle service life, better performance and higher-quality construction,” Wallace says.

In another instance, a yogurt processor was experiencing insufficient cleaning with a competitor’s stainless steel rotating spray ball. By switching to the HydroWhirl Poseidon series, which produces slower rotation and higher fluid impact, Wallace says the company was able to achieve a significant increase in the cleaning abilities of the CIP system. “We also had a winery switch to the HydroWhirl Orbitor series, because its employees could do maintenance on the machines onsite, rather than having to spend time and money sending equipment outside for service.” He adds that BETE also has customers using its air atomizing nozzles to coat food products with flavoring and drying products after they’ve been through a wash process.

A new product, released in August, is the HydroPulse pneumatically actuated nozzle that provides a flat-fan spray pattern from 0° to 110° with flow rates of 0.003 to 24.7 gpm. According to BETE, it provides a controlled, intermittent liquid spray, using only liquid pressure as the atomizing force, and drip-free performance with an air-controlled shut-off feature.

Tim Oberg, directorat Spraying Systems Co. of Wheaton, IL, says his company’s focus for many years was primarily on spray nozzles.  “We manufacture a wide range of nozzles used in many food processing operations such as cooling, rinsing/washing/drying, tank cleaning, equipment/plant washdown, lubrication and humidification,” Oberg states. “However, we’ve expanded our offering recently to include solutions for precision application of coatings and ingredients. Growth has been strong in our systems that apply antimicrobials, mold inhibitors, preservatives, flavorings, egg wash and more.”

The company’s line of AutoJet systems uses a spray controller and electrically-actuated spray nozzles to provide precision coating. The controller turns the nozzles on and off very quickly to control flow rate and make adjustments based on changes in operating conditions to ensure consistent, uniform coating with minimal waste.

“One of our newer systems is the AutoJet Antimicrobial Spray system which uses a SLIC (Sprayed Lethality in Container) process for pathogen control in meat processing,” Oberg says. “The system sprays a precise amount of an antimicrobial agent into a package or on to meat prior to vacuum sealing. This system helped North Country Smokehouse extend the 45- to 50-day shelf-life of its whole muscle and roll stock meat products to 70 days—a 40 percent increase. Other processors using the system have experienced a dramatic reduction in operating costs. Meat processor Old World Provisions estimates it is saving more than $300,000 a year on the cost of antimicrobials since installing the system on a roll stock line and a bagger.

Oberg cites the increased emphasis on food safety as an influence on new product development. “A lot of food legislation relates directly to food and not the equipment,” he notes.  “However, we’ve always focused on sanitary designs. Many of our products are constructed of food-compliant materials, feature sanitary connections, are self-draining and easy to clean and maintain. This is especially true of our spray nozzles, spray manifolds and tank cleaning equipment.”

“Our units can handle several hundred to several thousand containers an hour,” notes Kevin Lemen, Douglas Machines’ vice president of sales and marketing. “In the food industry, our most popular units are large tunnel washers that can handle up to 1,000 items at once.”

Food processors use and reuse a lot of different containers, and they all have to be thoroughly sanitized between runs to avoid any possibility of cross-contamination between different products. To save production costs, wash water, at 150°F, is often recirculated, with new water added on a regular basis to keep it fresh. The final rinse is in the 180°F range.

Douglas Machines does not manufacture any of its own nozzles, but outsources them from a variety of suppliers according to customer specs. It puts these nozzles with stainless steel housings and support systems into subassemblies and delivers them to its clients. “We work closely with all of our customers,” notes Lemen. “We put our own people in direct contact with factory specialists and, if needed, help them conduct wash tests, provide advice on cleaning specific types of soils, conduct manufacturing test units and provide designs, before-and-after pictures and written reports.”