This holiday season, clouds of Häagen-Dazs ice cream are reigning over Europe – in France, Belgium, Luxembourg, Spain and the United Kingdom – in shades of orange and pink, and flavors that are oh-so-delectable.

“Each year, we try to develop new and surprising shapes and recipes to elevate the Häagen-Dazs ice cream experience,” says Celine. “This year, we collaborated with designers who took their inspiration from our universe, continuing this successful saga of ice cream cakes.” 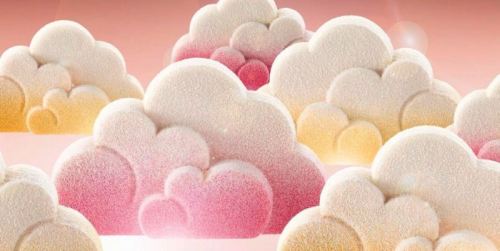 This year’s designs were created by Front, a Swedish collective of three young women whose work and lives are inspired by the nature and simplicity of the Nordic countries.

“As Scandinavians, snow is an essential part of our winters,” says the Front website. “We were inspired by how the snow clouds in the north transform the landscape and we made an ice cream snow cloud that sprinkles snowflakes on your plate.”

“Le Nuage,” which translates into the word “cloud,” is available in 25 Häagen-Dazs shops and in two recipes:

-Sunrise: A pink-colored ice cream cloud made with the flavor of Marc de champagne truffle combined with Belgian chocolate ice cream with a touch of rose, macaroon biscuits and chocolate crispy biscuits.

-Sunset: An orange-colored ice cream cloud that features the two flavors of dulce de leche along with cookies and cream, separated by a chocolate macaroon biscuit and salted caramel sauce on a milk chocolate crunchy biscuit base.

Available through Jan. 3, the beautiful-looking creations are made by the pastry chef at the Häagen-Dazs Champs-Elysées shop in Paris.

Also, a special offer consisting of the Sunrise cloud ice cream cake together with the Marc de champagne truffle pint is available at the Champs-Elysées shop for 53 euros ($73).

Previously, the ice cakes only were available in France, Belgium and Luxembourg. This year, the ice cream cakes made their debuts in Spain and the United Kingdom, where residents of Madrid and London can find out just how sophisticated and indulgent they are.

“Le Nuage” joins a line-up of five previous Häagen-Dazs ice cream cakes, including the Snowflake, Christmas Tree, the Iceberg, the Flower and the Ice Moon.