The Cereal Supply and Demand Brief provides an up-to-date perspective of the world cereal market. The monthly brief is supplemented by a detailed assessment of cereal production as well as supply and demand conditions by country/region in the quarterly Crop Prospects and Food Situation. More in-depth analyses of world markets for cereals, as well as other major food commodities, are published biannually in Food Outlook.

World cereal production (including rice in milled equivalent) is expected to increase by 8 percent in 2013, to 2 498 million tonnes. This forecast is almost 10 million tonnes higher than forecast in October, mostly reflecting upward adjustments to production estimates in Canada, China, EU, the United States and Ukraine. The sharp increase in 2013 cereal production mostly stems from a recovery of maize crops in the United States and of wheat crops in CIS countries. World rice production in 2013 is expected to grow only modestly. 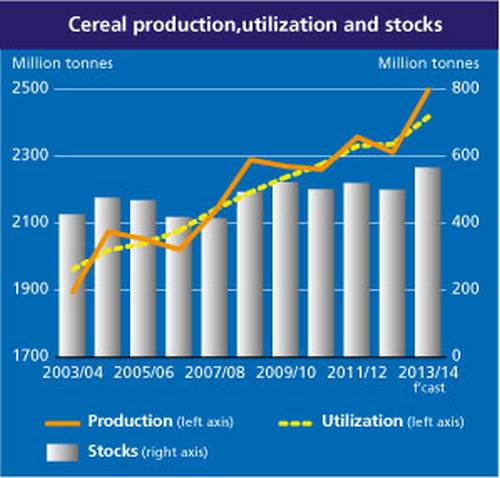 World cereal utilization in 2013/14 is put at 2 418 million tonnes, 3.5 percent higher than in 2012/13. Total food use of cereals is forecast at 1 099 million tonnes, up 1.7 percent from 2012/13.  Larger supplies and lower prices are expected to boost feed use of cereals by 5.3 percent, to 847.6 million tonnes. Global stocks, ending in 2014, are also anticipated to increase, by 13 percent to 564 million tonnes, with coarse grains alone up by 30 percent, mostly in the United States.  Wheat and rice stocks are also projected to increase, by 7 percent and 3 percent respectively.  The expansion in world cereal stocks would result in the global cereal stocks-to-use ratio reaching 23.0 percent, well above the historical low of 18.4 percent in 2007/08.