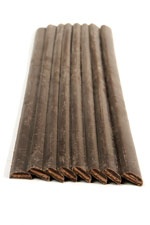 Notably, Montreal’s Morel took home the most medals of the competition: two Golds and three Silvers.

The Canadian National Competition, part of the run-up to the International Chocolate Awards, is now in its second year. More than 100 products were entered for these awards, which give out no more than one Gold in each category and a small number of Silvers. A judging panel made up of Canada’s top food experts and journalists joined the Canadian Grand Jury for three rigorous rounds of judging in Vancouver. The Canadian grand jury includes three permanent members who travel to multiple competitions, as well as a regional panel of experts.

Vancouver’s Beta5 Chocolates won the judges over with their innovative flavours. In the dark flavoured ganaches category, they won Gold for their Fisherman’s Friend dark truffle, a cheeky twist on the traditional chocolate-mint combination, as well as silver for The Whole Cherry, a combination of cherry-pit ganache and cherry-balsamic jelly. Rounding out the category, Montreal’s Christophe Morel picked up a Silver medal for their Black Forest confection.

After an industry consultation at the beginning of the year, a number of new categories have been added to allow for the use of white chocolate. Beta5 Chocolates is the first Gold winner in the new flavoured white category with its Black Olive Bar, consisting of candied black olive pieces suspended in white chocolate. Christophe Morel dominated the nut-based pralines categories, garnering a Gold for their Pecan Pie praline, Silver for their Coriander and Orange Praline and Silver for their Marcona Almond Praline. They also won Gold for their Palet d’Or Pure Chuao.

The judges were excited to see younger and smaller companies doing particularly well. Edmontons’s The Violet Chocolate Company, only in business since spring 2012, won a Gold medal in best flavoured milk bar for their Honey Rosemary Bar. In addition, Burnaby’s Chez Christophe Chocolaterie Patisserie, which opened earlier this year, took the Gold in the milk ganaches and truffles category for their Mango Bonbon. Rounding out the winners was Toronto’s MoRoCo Chocolat, which won a Gold in the white truffles and ganaches category for their Sub’Lime’ confection, and Sweet Lollapalooza Fine Chocolate & Confections took Silver for their Pure Nacional confection.