The FAO Food Price Index is a measure of the monthly change in international prices of a basket of food commodities. It consists of the average of five commodity group price indices (representing 55 quotations), weighted with the average export shares of each of the groups for 2002-2004. 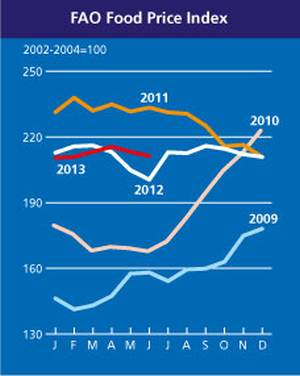 The FAO Cereal Price Index averaged 236.5 points in June, down 2.5 points (one percent) from May but still 14 points above June last year. Expectation of bumper crops this year is the main reason for the decline in international cereal prices. Wheat prices retreated most, because of seasonal harvesting pressure from the northern hemisphere crops. However, tight supplies are likely to continue supporting major coarse grains until the start of this year’s harvests in October. Rice prices changed little in June.

The FAO Oils/Fats Price Index averaged 198 points in June, marginally below May and the lowest level in six months. The decrease was driven by soy oil, mostly reflecting a rise in export availabilities in South America, where subdued consumption coincided with high soy oil production. Meanwhile, palm oil prices remained firm, due to slow production growth and falling inventory levels in Southeast Asia.

The FAO Dairy Price Index averaged 239 points in June, a fall of 10.8 points (4.3 percent) – declining prices need to be seen in the context of the exceptionally high levels recorded in April and May. Prices for all the products that make up the dairy index were lower although milk powder and butter fell most. Calm is returning to the market, after an abrupt fall in New Zealand’s end of season output, as dairy supplies are being sourced elsewhere, including Europe and the United States. Consequently prices are moving lower.

The FAO Meat Price Index* averaged 177 points in June, a rise of 3.4 points (2.0 percent) over the revised May level, which was reduced as a result of a fall in pork prices. Despite the rise in the June index, there are signs that international prices for meat are beginning to lose strength in the face of reduced import demand – especially from Asian countries where, in a number of cases and in particular Japan and the Republic of Korea, domestic production has increased and stocks have accumulated.

The FAO Sugar Price Index averaged 242.6 points in June, down 7.5 points (3.0 percent) from May. Sugar prices declined for the third consecutive month, on the back of anticipated large surplus production in major producing areas, notably in Brazil, the world’s largest sugar producer and exporter. This is in spite of heavy rains slowing harvesting in the Centre South region, the main producing area in Brazil.

*The FAO Meat Price Index is based on average meat export prices from a range of countries. As not all data were available at the time of its calculation, the latest value of the meat price index contains estimates and therefore is subject to revision.