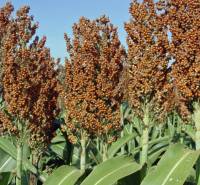 Promoters of grain sorghum think this relatively small participant among fall-harvested U.S. food crops is ready to come into its own.

The March 2013 Planting Intentions Report from the U.S. Department of Agriculture (USDA) indicated that producers in dry regions may have been getting a favorable message about sorghum. From 2011to 2013, the USDA reported a 39% increase in acres planted to sorghum: 7.6 million acres in 2013 compared with 5.5 million acres in 2011. In top producing Texas, the jump in sorghum plantings was 94% in those two years while the other leading sorghum producing state, Kansas, saw a much more modest 12% rise over the same period.

The total sorghum acreage is small in comparison to acres planted to corn, soybean and wheat. But the planting gains of late may represent a growing acceptance of sorghum’s list of strengths on the part of dry land farmers on the High Plains. In rotation with wheat, sorghum presents farmers with an alternative to crops that require more water in an environment growing drier with each passing year.

As the 2013 growing season has played out, excess rains and flooding in the Corn Belt have grabbed the headlines away from the 2012 drought story. But the U.S. Drought Monitor map still shows plenty of territory counties across several states in the hot colors of brown and orange signifying very scarce rainfall — especially western Kansas, the Oklahoma Panhandle and the Panhandle of Texas.

These are regions that expect to have drought conditions about one out of every two crop years. Farmers there often practice the summer fallow method of cultivation, taking a year off every few growing seasons to allow the soil to build back its moisture.

The underground Ogalala Aquifer, once able to deliver enough water to power massive pivot irrigation systems across fields of wheat and corn, is slowing down considerably and only able to produce a fraction of the water per hour that it once did.

“In our area (the Texas Panhandle) we have seen the water table be able to go from delivering 500 to 600 gallons of water per minute to only being able to produce 100 to 200 gallons per minute,” said wheat and sorghum farmer Troy Skarke. “It is not even feasible to irrigate.”

This is where sorghum thrives — and does so wherever water is scarce, even near the East coast where states such as North Carolina have sectors where the soil type struggles with maintaining moisture, said Justin Weinheimer, Ph.D., crop improvement program director in Lubbock, Texas, and part of the check-off program that seeks to encourage more sorghum cultivation in the United States.

The sorghum check-off program doesn’t expect to increase consumption by getting more people to use the famous molasses manufactured from sorghum. Weinheimer estimated that molasses accounts for less than one-tenth of 1% of total sorghum production. Instead, he sees growth for sorghum as a livestock feed — a substitute for corn that works for swine and poultry as well as silage for dairy and beef cattle — and as an ingredient in ethanol and in the ever-growing universe of gluten-free foods marketed to people with celiac disease or gluten sensitivity.

Export partners in Southeast Asia and Mexico have been buying U.S. sorghum to feed to their livestock in increasing amounts, he added. Sorghum contains a little less energy than corn and is typically about 95% as expensive as corn, he said, pointing out that one of its strengths, since it is so drought tolerant, is greater reliability than corn grown in similar environments.

The USDA’s May Grain World Markets and Trade report said global sorghum trade is “forecast to grow sharply because of a strong recovery in U.S. exportable supplies and robust demand from Mexico.”

Jay O’Neil, a senior agricultural agronomist with Kansas State University’ International Grains Program, said one goal for sorghum advocates is to get the acreage planted back to the 10 million acres that represented the height of U.S. sorghum cultivation in recent years.

He said there were a few reasons why sorghum was sometimes a tough sell, mostly the continued dominance of bioengineered corn that can tolerate cultivation further and further west in the High Plains. Corn yields more than sorghum — lots more — ( 123.4 bushels per acre in the bad drought year of 2012-13 compared to 49.8 bushels per acre for sorghum) and, for producers who only look at that factor, the argument is that they will make significantly more money growing corn than sorghum.

But O’Neil said other issues affect the cost/benefit ratio of planting sorghum in dry areas. Water conservation is the main variable, and water is only going to become more expensive in the High Plains.

He added that some out-of-date assumptions about the nutritional value of sorghum need to be corrected to reflect current conditions. He said that, as corn’s yields have improved, their protein content has lessened to where sorghum often has a higher protein level than corn and should trade at 95% the value of corn or more. And, so far, bioengineering appears ready to market “drought-resistant corn” but not “drought-proof corn” and sorghum is virtually drought proof.

Between the water-conserving properties of sorghum and its strong nutritional profile, O’Neil said the sturdy plant growing where drought can kill other edible crops “has a good story to tell.”