The FAO estimate for world cereal production in 2012 has been cut since April, by nearly 4 million tonnes, to about 2 306 million tonnes (including rice in milled terms), falling 2 percent short of the previous year’s record. This month’s downward revision reflects adjustments to wheat and rice while coarse grains remained virtually unchanged. Turning to the new 2013 season, latest indications keep pointing to a strong growth in world cereal production. FAO’s current forecast of global wheat  production in 2013 stands at 695 million tonnes, 5.4 percent up from last year’s harvest and just some 6 million tonnes short of the historical high in 2011. Much of the increase is expected to be concentrated in the EU and CIS countries, driven by increased plantings in response to attractive prices, but also by expectation of a return to normal yields in the Russian Federation and Ukraine after drought last year. The outlook is also positive in Asia, where bumper to record crops are expected in the main producing countries. By contrast, prospects have deteriorated in the United States where drought persists on more than half of the winter wheat area and production looks likely to decrease this year. FAO’s first forecast for world production of coarse grains in 2013 has been set at 1 266 million tonnes, 9.3 percent up from last year and a new record, well above the previous high of 1 167 million tonnes achieved in 2011. Of the total, maize is expected to account for about 960 million tonnes, some 10 percent up from 2012. Good crops already being harvested in some Southern Hemisphere producing countries but the bulk of the increase is anticipated in the United States, the world’s largest producer, where maize plantings are forecast to reach their highest level since 1936. Recovery from drought in the major CIS producing countries should also contribute significantly to the record production of coarse grains expected this year. Still tentatively, and assuming a return to a more normal weather pattern in Asia, FAO foresees rice production in the forthcoming 2013 season to rise to 497.7 million tonnes, 10.2 million tonnes more than in 2012, with particularly large increases expected in India and Indonesia.  (For more details on latest 2013 production prospects please refer to the GIEWS Update – Production Prospects for 2013 Cereal Crops). 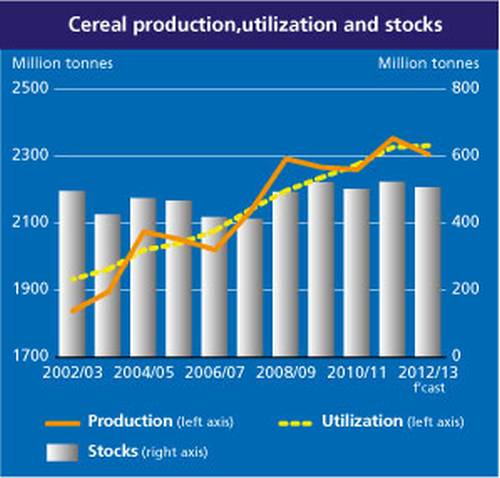 World cereal utilization to stagnate in 2012/13

World cereal stocks revised up, but still indicate a drop from 2012

At 304.4 million tonnes,  world cereal trade in 2012/13  would be almost 1 million tonnes larger than forecast last month, still implying a decline from 2011/12 of about 4 percent (13 million tonnes). The anticipated year-to-year contraction in world cereal trade would be the result of smaller shipments of wheat, coarse grains and rice, with a particularly sharp decline anticipated for wheat. World wheat trade (including wheat flour in wheat equivalent) is forecast to reach 139 million tonnes in 2012/13 (July/June), 1 million tonne less than predicted last month, and now as much as 5 percent below the 2011/12  estimate. Much of the yearly decline reflects expectations of smaller imports by Egypt and several countries in Asia, while this month’s downward adjustment was on account of lowering of forecast shipments to Bangladesh, EU, Kenya, Morocco and Viet Nam, more than offsetting higher forecasts for China and the Islamic Republic of Iran.  World trade in coarse grains is foreseen to reach 128 million tonnes, which is 1.5 million tonnes more than expected last month, but still some 3 percent below the estimated trade in 2011/12. While the bulk of the decline from the previous season reflects lower purchases by Mexico, Egypt and Saudi Arabia, this month’s upward adjustment to world trade stems from significantly higher import forecasts for China, the EU and the Islamic Republic of Iran which more than offset a lowering of forecasts for Mexico and the Republic of Korea. Trade in rice in calendar year 2013 is projected to hover around 37.4 million tonnes, slightly higher than the April forecast of 37.0 million tonnes. At the new forecast level, the volume of rice exchanged on world markets would be 3 percent smaller than the 2012 record, with India and Brazil accounting for much of the decline in world exports, while China, Indonesia, Nigeria and Senegal would be much behind the decline in imports.