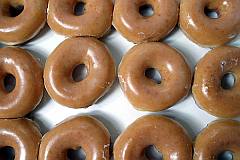 Can you eat a doughnut without licking your lips or is that part of the pleasure? 40% of people who took part in an on-line doughnut survey, for National Doughnut Week, seem to think it is part of the pleasure when they admitted to love at first bite by taking the biggest bite they could fit in their mouth!

Despite this carefree and lipsmacking attitude to eating a doughnut, over ninety per cent of those surveyed displayed a more considered and reverential approach to picking up their doughnut in the first place by lifting it to their mouth very gently, using a combination of thumb, forefinger and index finger – suggesting that even the hungriest of doughnut eaters likes to savour the anticipation of the delights of their doughnut.

Already highlighted by food pundits as this year’s top cake trend, this fun survey gave us a fresh insight into not only how people eat doughnuts but also the psyche of doughnut fans when asked about sharing the last remaining doughnut in the box.

Whilst many generous doughnut eaters were happy to share the last doughnut with friends there were clear indications that only equal shares were acceptable. In a number of instances an element of ‘winner takes all’ was introduced with rock, paper, scissors type judgements on the outcome of the last and obviously highly valued doughnut.

For craft bakers, coffee shops and high street cafes seeking to increase doughnut sales and raise even more money for charity during National Doughnut Week, our survey suggests they can make the most of the consumer’s doughnut eating experience through tempting counter displays that can help build the anticipation that precedes that first bite.

National Doughnut Week runs from 11 – 18 May 2013 and aims to help independent craft bakers, and coffee shops increase sales of doughnuts, raise awareness of their role on the high street and raise money for The Children’s Trust.