FAO’s latest forecast for world cereal production in 2012 has been revised upward by 4 million tonnes since the February figure to 2 306 million tonnes (including rice in milled terms), but still about 2 percent down from the previous year’s record. The latest revision largely reflects upward adjustments for rice as the 2012 secondary crop harvests in some countries are still ongoing or have just been completed.

FAO’s first forecast for world wheat production in 2013 stands at 690 million tonnes, which would be 4.3 percent up from the 2012 harvest and the second largest crop on record after that of 2011. The increase is expected mostly in Europe, driven by an expansion in area in response to high prices, and a recovery in yields from below-average levels in some countries last year, notably the Russian Federation. Aggregate plantings in the EU are estimated up by 3 percent and weather conditions have been generally favourable so far. In the Russian Federation, assuming normal spring conditions, overall wheat area is forecast to expand and yields should recover from last year’s drought-reduced levels. Also in Ukraine, a large recovery in wheat output is anticipated following increased planting and satisfactory weather. In Asia, prospects for the 2013 wheat crop, to be harvested from April, are mostly favourable in the main producing countries. New record high crops are forecast in China and Pakistan, while India is on course for another bumper harvest. By contrast, the outlook in the United States is less favourable as severe drought conditions of the past months in the Southern Plains may reduce winter survival rates and yields in affected areas. Thus, despite an estimated 1 percent increase in winter wheat plantings and the likelihood that spring plantings will at least match last year’s level, if not expand slightly, aggregate wheat output is tentatively foreseen to decrease by as much as 6 percent in 2013. In the Southern Hemisphere, the major wheat crops will be sown later this year, so the outlook at this stage is very tentative. In Australia, where planting should get underway in April, prospects are uncertain after a summer heat wave, which has depleted soil moisture reserves in some important growing regions. 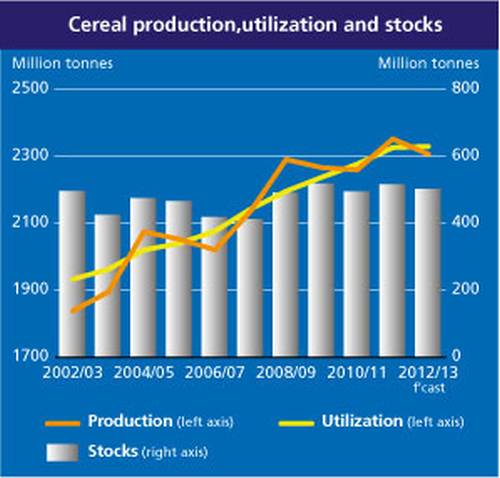 Prospects for the first 2013 maize crops in South America remain generally favourable. In Brazil, following favourable precipitation, official forecasts point to a 9 percent increase in production compared to the same season’s output last year. Planting progress for the second season crop is also satisfactory under the good moisture conditions and the area is expected to increase from last year’s level. In Argentina, official estimates indicate that maize plantings have fallen some 8 percent from the record high of 2012. Nevertheless, at the estimated area, a recovery of yields after last year’s drought-reduced level could see production rise to a record high of 25.5 million tonnes. However, a dry spell from early January through early February may impact negatively on yields of late planted crops if more rains do not arrive soon. In Southern Africa, the 2013 cereal crops have developed satisfactorily overall in the large producing areas and current indications point to improved yields over last year’s average level, except in Namibia, where rains were below normal. In South Africa, the subregion’s main producer, 2013 maize production is anticipated to reach near record levels, above 13 million tonnes, if favourable weather persists.

At the current forecast of 489 million tonnes, world rice production in 2012 would be 1 percent, or 4.3 million tonnes, higher than the revised 2011 estimate, a rather disappointing outcome if compared with the large gains registered in the previous two seasons. The increase is expected to be mostly concentrated in Asia, where output may reach 443 million tonnes, 4.2 million tonnes more than in 2011. Meanwhile, several countries located along and south of the equator have already started, or are about to start, collecting their 2013 first crops. Indonesia is targeting a 5 percent increase in production in the coming season, under the Government expansionary drive. Sri Lanka is heading towards a 4 percent area-based increase in output in 2013. Argentina, which will officially open the rice harvest on 8 March, has reported a 2 percent retrenchment in plantings. The season is also well advanced in Brazil, where officials are predicting production to rise by 3.7 percent to about 8 million tonnes, despite a small contraction in the area. In New South Wales, where much of the Australian rice is grown, production is expected to expand by 15 percent, to its highest level since 2002, thanks to the availability of abundant irrigation water in reservoirs.

Utilization up marginally, constrained by falling demand for ethanol production

The forecast for world cereal utilization in 2012/13 has been raised slightly (by about 3 million tonnes) since February to 2 330 million tonnes, reflecting small adjustments to the estimates for food and other uses. At the current forecast level, global cereal utilization would be barely 3.8 million tonnes greater than in 2011/12, sustained mainly by increases in food consumption, now predicted to expand by 14 million tonnes, or 1.3 percent. This rate is sufficient to keep per caput food availability stable at 152.8 kg per year for cereals as a whole, with a small decline in wheat to 66.9 kg offset by modest increases in rice and coarse grains to 57 kg and 28.9 kg, respectively.  On the other hand, world utilization of cereals as feed is likely to be only marginally higher than in 2011/12, as a sharp reduction in wheat feed usage from the previous season’s record level is expected to be fully made up by coarse grains.

The tightening of wheat supplies and resulting high prices since mid last year are behind the expected 2 percent contraction of total wheat utilization in 2012/13, to 683 million tonnes. Much of this decline would be on account of an 8 percent reduction in feed utilization from the previous year’s record, a drop that is expected in most countries except in the United States, where feed wheat use could double in 2012/13 and reach a record, mainly in substitution for maize. Total utilization of coarse grains is forecast to rise by 0.8 percent to 1 169.7 million tonnes.  While world feed use is expected to rebound by 2.4 percent to a record 649 million tonnes, the anticipated 10 percent fall in the use of maize for production of fuel ethanol in the United States, which is forecast to fall to 114 million tonnes in 2012/13 from 127 million tonnes in 2011/12, is behind an overall 3.2 percent contraction in world usage of coarse grains other than food and feed.  World rice consumption in 2012/13 is forecast at 477 million tonnes, 1.6 percent (7.4 million tonnes) higher than the previous season, underpinned by a rise in human food consumption to 403 million tonnes, or 85 percent of the total utilization.

The forecast for world cereal stocks at the close of crop seasons ending in 2013 has been scaled up by about 4 million tonnes compared to February, mainly reflecting upward revisions in wheat inventories. At 499 million tonnes, the new estimate of cereal carryovers would still be 2.7 percent (14 million tonnes) lower than in the previous season, reflecting an anticipated drawdown in wheat and coarse grains, while rice inventories are expected to rise further. At the current forecast level, the world cereal stock-to-use ratio would reach 20.7 percent in 2012/13, down from 22 percent in 2011/12. As much of the contraction of world cereal reserves stems from reductions in exporting countries, the ratio of major cereal exporters’ closing stocks to their total disappearance (defined as domestic utilization plus exports) is estimated to slide from 17.9 percent in the previous season to 16.4 percent in 2012/13. World wheat inventories are anticipated to fall from the previous year by 9 percent (15 million tonnes) to 162.5 million tonnes, despite a 3.6 million tonnes increase from the forecast in February on higher than earlier projected stocks in the Russian Federation and Ukraine. Nonetheless, the contraction over the season would still be mainly on account of Kazakhstan, the Russian Federation and Ukraine, while lower ending stocks are also projected for Australia, the EU and the United States. The forecast for world coarse grains carryovers remains unchanged from the February level of 165 million tonnes. At this level, world inventories would have fallen by 6 percent (10 million tonnes) from their opening level, with the United States and the EU expected to draw drown their reserves by almost 9 million and 4.3 million tonnes, respectively. By contrast, global rice inventories are expected to surge by 7.3 percent (11.7 million tonnes) to 172 million tonnes, sustained by a sharp accumulation in China but also in Thailand, where the Government pledging programme continues to divert supplies away from the market into public stockpiles.

Trade in 2012/13 contracts less than was anticipated earlier

World trade in rice in 2013 is forecast at 37 million tonnes, 2 percent below the record 37.8 million tonnes traded in 2011. The decline would mainly stem from lower shipments by India, which emerged as the world leading rice exporter in 2012, before Viet Nam and Thailand. In 2013, however, Thailand is foreseen to recover its primacy among exporters, provided that releasing supplies from government stocks could help restore the country’s international competitiveness.