Apart from the fact that HRS wheat is currently very competitively priced, HRS also offers superior quality in terms of higher protein content (typically about 2.0% higher) and better protein quality. Flour made of U.S. HRS wheat is more elastic and has more extensible gluten than flour that is made of German E-Wheat. As a result, dough made of HRS wheat has better gas-holding capacity than dough made of German E-Wheat. This makes HRS wheat very suitable as blending wheat and for the production of high quality flour mixes for specialty breads, such as Easter breads, and for high volume breads with good crumb structure.

Reporting Wheat Protein Content in the U.S. and in Europe

U.S. Wheat’s weekly Price Report that is published every Friday afternoon shows the protein content on both the U.S. standard 12.0% moisture basis and on a dry matter or 0% moisture basis that is common in Europe.

It is reported in the following way:

Protein content in the U.S. has been reported on a fixed 12% moisture basis since the Grain Quality Act of 1986. This was done to allow for comparison of protein in lots having differing moisture levels.

As of January 1, 2013 the country-specific Tariff Rate Quota (TRQ) of 572,000 MT for U.S. origin wheat has become available again. Until June 30, 2013 a maximum quantity of 572,000 MT of low and medium quality common wheat of U.S. origin can be imported in the EU at zero duty. Applicants must submit a license application to the appropriate Member State. As of February 1, 2013 the EU has issued licenses for the imports of a total of 268,000 MT of U.S. origin common wheat. Most of this quantity will be Soft Red Winter wheat (SRW) destined to Spain. Roughly 25,000 MT of SRW will be destined to the UK and about 25,000 MT of SRW will be destined to Italy.
Consequently, there is 304,000 MT of TRQ for U.S. origin wheat left. Those who consider importing U.S. wheat under the TRQ will therefore probably have to act quickly, because the remaining quantity of 304,000 MT might be depleted soon. The table below summarizes the TRQ situation as of February 1, 2013:

When the 572,000 MT of annual import Tariff Rate Quota of the U.S. will be exhausted, importers can make use of the remaining import quota 09.4133, which is for the imports of wheat from all third countries.
U.S. Drought Monitor and U.S. Seasonal Drought Outlook According to the USDA Drought Monitor Map, a large part of the Hard Red Winter wheat (HRW) area in the central and southern Great Plains has been severely impacted by the lack of moisture. Spring rains will be especially important for the 2013 crop. 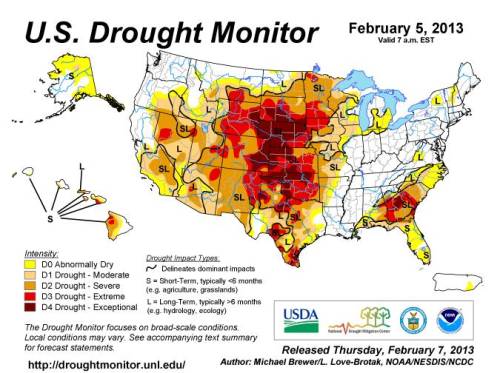 The U.S. Seasonal Drought Outlook shows improved prospects for moisture conditions in the next three months in the Northern Great Plains, especially in Minnesota and much of northern North Dakota. Nationwide, the map shows little change in the persistent drought ranging from South Dakota, Nebraska, Kansas, Oklahoma and Texas. 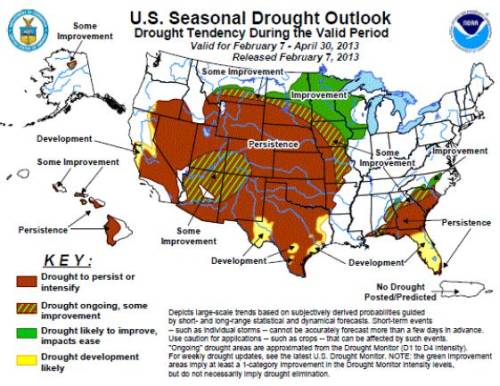