Created by master chocolatier Andrew Farrugia, from Malta, this edible train model has set a new Guinness World Record the longest chocolate structure in the world. It measures a whopping 34 meters in length and features every detail of a classic steam-powered choo-choo.

Unveiled at the “Brussels Chocolate Week”, in Belgium’s capital city, this tasty masterpiece had everyone drooling. Made of 2,755 pounds (1250 kilos) of the finest Belgian chocolate, donated by chocolate brand Belcolade, this 34-meter-long steam train replica took Maltese chocolate artist Andrew Farrugia a painstaking 784 hours to complete. If you’re wondering about calorie volume, this delicious masterpiece packs a massive 6.5 million calories. Farrugia got the idea for the train last year, when visiting Belgian Chocolate Festival in Bruge. ”I had this idea for a while, and I said what do you think if we do this realization of a long chocolate train, you know, because a train you can make it as long as you like,” he told the press. 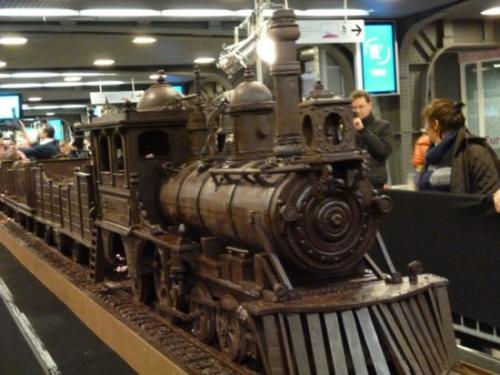 The chocolicious train is made of two parts: the first seven wagons are modeled after the new Belgian trains, and the rest of the train is modeled after the old train wagons, including a wagon with a bar and restaurant on board. The artist created the masterpiece in his home country of Malta, and had all its different parts transported to Belgium in 25 wooden boxes. Unfortunately, the train sustained considerable damage during the trip, and several of the train’s walls had completely collapsed. But, after working day and night to repair everything, the train was ready for the big unveiling, which took place yesterday.
After measuring the train and confirming no other materials but chocolate were used, Guinness Book officials declared it to be the longest chocolate structure in the world. It’s still not the largest chocolate sculpture ever created, but it’s definitely impressive to look at.
Source: Oddity Central