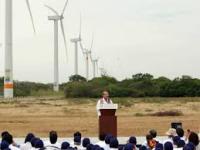 Grupo Bimbo concluded today the largest and most important conversion to renewable energy sources done by a company in the food industry at a global level. Daniel Servitje, Grupo Bimbo CEO, started-up the operations of the Piedra Larga Wind Farm that will supply electric power to 45 facilities in Mexico, covering almost all of the company’s operations in the country.

Built in the State of Oaxaca, Piedra Larga fulfills one of the most ambitious objectives of the Company by significantly reducing its carbon footprint.  Its installed power yield is for 90 MW with 45 wind turbines.  It avoids emitting approximately 180 thousand tons of CO2 into the atmosphere, annually, which is a figure equivalent to the CO2 absorption capacity of close to five million mature trees.

Attending the event were Felipe Calderon, the President of Mexico, Gabino Cue, Governor of the State of Oaxaca, Juan Domingo Ortega, President of Renovalia, among other authorities.

Daniel Servitje stated that Piedra Larga is the largest wind farm in the world built to supply electric power to a company in the food industry.  “We are sensitive to environmental challenges; hence, we strive to contribute in an innovative way, seeking to reduce the environmental footprint.  Piedra Larga is an example of it,” observed the CEO.

The Senior Leader detailed the 18-year partnership agreement binding Grupo Bimbo, as the consumer partner and DEMEX, the Mexican affiliate of Renovalia Energy, as the investing partner.  “The construction of Piedra Larga had a cost of 200 million US dollars.  Grupo Bimbo did not participate as an investing partner, but its long-term commitment to consume the energy generated will bring about social, environmental and economic benefits for the Company.”

On his part, Don Juan Domingo Ortega, President of Renovalia Energy, mentioned that Piedra Larga is an emblematic project due to its size and capacity.  “It is evidence that wind power is a viable model for the electric power system’s sustainability.”

“In Grupo Bimbo, sustainability is at the core of our strategic decisions, recognizing the essential value imbued in seeking the convergence among our present social, environmental and economic objectives and meeting the needs and development potential of future generations,” concluded Daniel Servitje.  Finally he expressed Grupo Bimbo’s intention to transfer renewable energy projects to other countries where it is present.