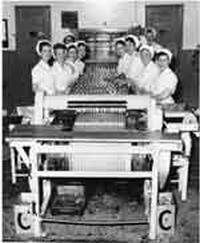 Mars Chocolate UK is celebrating its 80th year in the UK.

The Mars story began in the UK in 1932 when Forrest E Mars, Sr, moved to the UK with money ‘in his back pocket’ to set up a new business and the recipe for his family’s Milky Way bar that had already proven to be a huge success in his native US.

Starting life in the UK as Mars Limited, and occupying a small rented manufacturing unit on the Slough Trading Estate, Forrest combined the knowledge gained from his father, his own engineering skills and his objective to ‘create mutuality of benefits for all stakeholders’ to build a successful company.

The first product to emerge from this new company was the nougat and caramel filled Mars bar, which was based on the Mars family’s American Milky Way recipe. The launch marked a step-change for a UK confectionery market that was dominated by block chocolate. The new bar proved a massive hit with UK consumers and at the end of the first year’s production had sold two million bars with the business generating £15,000.

Since these modest beginnings, the Mars bar has gone from strength to strength, it is still the number one substantial bar in the UK and, 80 years since its introduction to the UK, it is still proudly manufactured in Slough and the brand is now worth £89 million a year.

Today, the Slough Factory produces many other globally successful chocolate brands, including Snickers, Galaxy, Minstrels, Maltesers and Revels. These products are both consumed here in the UK and exported from Slough across Europe, and as far as China and Australia, with the facility producing more than 2.5million Mars bars every day using the skills of more than 1000 people employed at its UK head office and factory.

Fiona Dawson, president of Mars Chocolate UK comments, “It is fantastic to be celebrating 80 years of Mars Chocolate and we are very proud that the birthplace of the iconic Mars bar remains our home to this day. Eighty years on, we have continued our commitment and investment in Slough and the local area. We would like to say a special thank you to our customers, suppliers and employees. Without their support reaching this 80-year milestone would not have been possible.”

Mars’ growth and success in the UK is not confined just to Slough, there are currently factories and offices in 14 towns nationwide. Mars UK currently employs over 4,000 people across its chocolate, petcare and food businesses and continues to invest millions of pounds in British manufacturing every year. Including a new £5 million R&D facility at its Slough factory that is due to open next month.