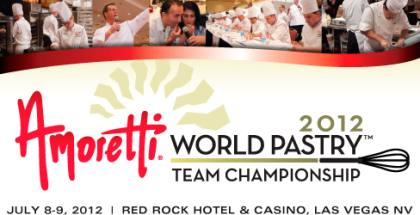 After two days of competition at the World Pastry Team Championships in Las Vegas, Team Japan was named first place overall winners and Team USA won best dégustation and second place overall in the challenge, inspired by astrology and horoscopes. The all-American team of National Pastry Champions consisted of Chef Donald Wressell, team captain, and Chefs Scott Green, Joshua Johnson and, alternate, Della Gossett of the The French Pastry School of Kennedy-King College at City Colleges of Chicago. The achievement for Team USA comes after two years of preparation, including the qualifying National Pastry Team Championship in 2011.

Team Netherlands placed third and other competitors heralded from China, Mexico, and South Korea, where they had to undergo intense training and competition in order to be selected to represent their country’s best in pastry. The selection process for the World Pastry Championship began in 2010 when the event organizers culled pastry professionals from around the globe with impressive pedigrees and experience in competition. Much like the Olympics, each country held a qualifying round of National Pastry Team Championships to ensure that their best pastry chefs would be sent to compete on the international level.

With the high level of competitors, the panel of renowned pastry chef judges evened the playing field by evaluating the overall performance of the individual teams based 40 per cent on degustation, 30 per cent on work ethic and hygiene, and 30 per cent on artistry and technical merit. Each team had to produce one chocolate showpiece, one sugar showpiece, fourteen identical plated desserts, three identical entremets, three identical entremets glace, three different types of petits gâteaux, three different types of chocolate bonbons, and one sugar and chocolate amenity presentation piece on which to display the bonbons, all inspired by astrology and horoscopes.

Taking their cue from the Chinese Zodiac, Team USA chose the sign of the Rooster, symbolizing confidence and motivation, as inspiration for their chocolate and sugar showpieces. Using blown sugar claws, wattles, and comb; cast-sugar body; and pastillage feathers airbrushed black, white, and gold, Green portrayed a rooster spoiling for a fight. Johnson’s chocolate showpiece flapped its wings, flaunting motley feathers which had been expertly cut, shaped, and arrayed. Each showpiece weighed between 30 and 40 pounds and had to be moved from their workstations to a display table before the final judging took place.

More than one dozen judges contemplated and tasted the work as the competitors presented each completed product. Throughout the two-day competition, which took place over thirteen total hours, spectators from all around the world were cheering on their country’s representatives. The audience, made up mostly of pastry professionals and students, were treated to an excellent show in which they were able to witness the latest in pastry techniques and aesthetics.

“It was a really positive experience to be able to see all the competitors working on that high level,” Chef Johnson of Team USA said. “Competitions push concepts, trends, and individuals and that moves the pastry industry forward. It also inspires young professionals to reach for that level and to challenge themselves no matter where they are.”