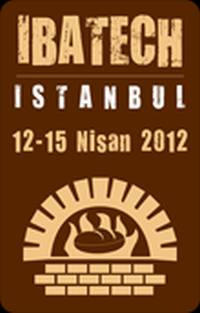 The 2012 IbaTech  held in April at the Istanbul CNR Expo was a huge success. IbaTech is Turkey´s largest international technology fair for bakers and the baking and confectionery industries. This year´s IbaTech, which has taken place five times on the Bosphorus, increased its attendance from 44’330 in 2010 to 56’453 visitors.

The fair is also becoming increasingly international, with trade visitors attending from 66 different countries. The most visitors came from Turkey and neighbouring Greece and Bulgaria, as well as Romania, Iran, Iraq, Russia, Cyprus, Germany and Lebanon. IbaTech once again clearly demonstrated its prominence as the leading baking and confectionery trade fair in Turkey, Eastern Europe and the Middle East.

The number of exhibitors also increased significantly from 257 in 2010 to 287 in 2012. Among these were 33 leading international companies who demonstrated their newest technologies for the baking, confectionery, ice cream and chocolate industries on over 30’000 square metres of exhibit space. The IbaTech exhibitors were delighted with the results of the fair, with initial feedback indicating that it generated over 500 million USD of business volume.

Turkey has the world´s highest per capita consumption of baked goods, with an annual trading volume exceeding six billion USD. The sector is showing growth in the area of brand and distribution systems. The bulk of Turkish bakery, confectionery, chocolate and ice cream technology is exported to Russia, the UAE and the Balkans.

The next IbaTech Istanbul is scheduled for 10 to 13 April, 2014. In future, IbaTech Ankara will be part of the Messe Stuttgart portfolio, with the first fair scheduled for 14 to 17 April, 2013.