Mon Dieu! American fast-food giant McDonald’s has co-opted France’s signature carbohydrate, rolling out a new burger on a baguette rather than a bun.

Starting April 18, McDonald’s France will begin serving the McBaguette, a burger with lettuce, local Swiss cheese and mustard sauce, at 1,228 restaurants across the country. The company said it sought out French suppliers for the baguettes, which are baked in stone ovens for a crisp crust.

The Wall Street Journal reported  that the McBaguette would cost around 4.50 euros, or about $6. McDonald’s would not confirm that pricing, but said it would vary based on the market. 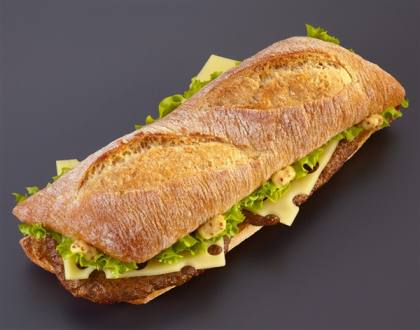 Diners who associate McDonald’s exclusively with burgers and fries might be surprised to learn McDonald’s has been adapting its menu to cater to regional tastes worldwide. At McD’s in India, for example, you can get a fried patty of paneer cheese on a bun and topped with spicy sauce.

In a statement, Nawfal Trabelsi, senior vice president of marketing McDonald’s France and Southern Europe, said the McBaguette is just the latest in a series of offerings designed to appeal to the palates of local diners. McDonald’s France currently offers four burgers garnished with local cheeses.

For now, the McBaguette is a limited-time menu item, available for six weeks only, although if it proves to be popular, this French twist on an American sandwich could become part of the regular line-up.

Would you pay $6 for a McBaguette?