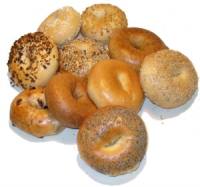 Six out of 10 Canadians eat bagels on a regular basis with nearly a quarter eating these circular delicacies daily or several times a week, Dempster’s Bagel Barometer reports.

To celebrate National Bagel Day on Feb. 9, Dempster’s has launched a new bagel recipe. Dempster’s has also partnered with well-known chef and bagel fan, Bob Blumer, to uncover Canada’s most passionate bagel-lovers and find out what an ultimate Canadian bagel’s defining qualities are.

“As a card-carrying bagel lover, I’m not surprised that millions of Canadians get their bagel on every day and are dedicated to their particular rituals for toasting, topping and eating – finding the right bagel changes everything!” said Blumer.

Canada’s most bagel-loving province is Ontario at 66 per cent, closely followed by Atlantic Canada (61 per cent), and Alberta (59 per cent) in third place. The majority of Canadians (90 per cent) also prefer to go toasted, with one-third topping their bagels with cream cheese.

And when it comes to the ultimate bagel must haves, Canadians are very particular with even toasting (59 per cent), freshness (57 per cent), and variety (47 per cent) rounding out the top three. Following closely is a “crispy, crunchy crust” and “soft and fluffy inside” (42 per cent), and the ability to hold all toppings (33 per cent).

The Dempster’s Bagel Barometer also revealed personality differences between Canadian bagel lovers, with nearly six out of 10 falling into the “craver” category. Whether it’s a hankering for a bagel’s crunchy soft texture, to try something different or to satisfy hunger, the craver chooses bagels to tantalize their taste buds, so it has to be just right. One-quarter of Canadians are “energizers” who to start the day with a bagel fuel up. The remainder are in one of two camps: “connoisseurs”, who take the time to create delicious new ways to enjoy their bagels, and “purists” who eat bagels the same way every time.

“I tick off all the boxes of bagel fanaticism, so I totally connect with the fact that beginning with the right bagel and adding your favourite toppings is an instantly gratifying form of personal expression,” Blumer said. “And while the majority of Canadians prefer cream cheese, butter or smoked salmon, working with the variety of Dempster’s bagels and the Canadian bagel personality profiles has given me the opportunity to look beyond the classics and create some new combinations inspired by my culinary travels. Check out these fast ‘n’ flavorful recipes on the Dempster’s Facebook page!”

In honour of National Bagel Day, Dempster’s has created a new recipe with Canadian taste buds in mind. The company will be taking their new recipe on the road this February and March. The Dempster’s Pop Up Bakery – a larger than life toaster – will be making its way across the country to serve delicious samples to Canadians. Whether topped with cream cheese, butter, or jam, Dempster’s Bagels Toast Up Tour will offer a taste for everyone in markets including Toronto, Ottawa, Calgary, Winnipeg and Vancouver.

The Bagel Barometer survey was conducted by Harris / Decima from Dec. 1 to 4, 2011, via telephone. The survey is based on a randomly selected sample of 1,000 Canadians ages 18 and older. The margin of error for a sample of this size is +/- 3.1 per cent.