A new theme park made entirely of chocolate has just opened in China’s Shanghai.

Shanghai’s World Chocolate Wonderland welcomed visitors through its doors on Friday (December 16), into a theme park of lifelike chocolate exhibits.

According to Reuters, everything on display was made from chocolate, including a replica of ancient China’s famous Terracotta Warriors and the traditional Chinese symbol of the dragon.

Organisers say that the choice of delectable items on display was made based on an effort to unite the East and the West.

Tina Zheng, manager of the Beijing Artsource Group that is behind the mouth-watering project, said that the exhibit is the result of a ‘clever combination’ of both cultures. 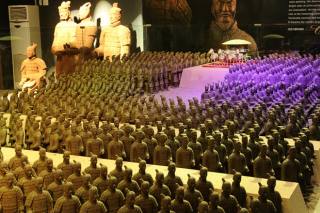 ‘The truth is, Western and Eastern cultures together can make a clever combination. So here at the exhibition, you can see that we have used Western chocolate, which has more than 3000 years of history. But Chinese culture has a history dating back over 5000 years. So blending both Western and Eastern cultures to make a clever and creative combination has brought about a creative spark.’

The exhibition has attracted visitors of all ages, young and old. 19-year old Chen Aobo (pronounced Chen Ow Boh) said that he was impressed by how lifelike the chocolate articles were.

‘I feel that it’s quite cosy here, plus most of the exhibition was extremely lifelike, and the dragon and terracotta warriors were so vivid and so well-made, so I think it’s all pretty good.’

Also on display were chocolate models of Chinese porcelain vases.

As much as adults may enjoy the novelty of being surrounded by chocolate objects, it is much more of a dream come true for sweet-toothed children.

A chocolate fashion show, in which models strut down the catwalk in fancy chocolate outfits, was hosted earlier on Thursday (December 15) ahead of the grand opening.