Food scientists have made a fundamental insight about sugar that could lead to a better-tasting caramel in your favourite candy bar.

Casting doubt on the long-prescribed belief sugar melts, new research published in the Journal of Agricultural and Food Chemistry shows that sugars such as sucrose decompose as they become liquid. 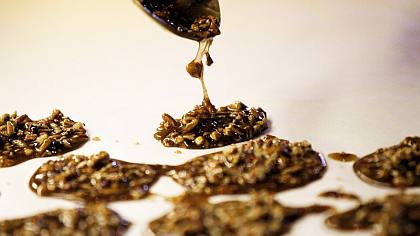 Food scientists have made a fundamental insight about sugar that may lead to a better-tasting caramel in your favourite candy bar. (AP- Gerald Herbert)

“What happens with sucrose, and there’s other sugars that do this, too, is that the loss of crystal structure occurs because you get decomposition of some sucrose molecules and that causes the structure to fall apart,” explains Shelly J. Schmidt, a professor of food science at the University of Illinois.

In the case of sucrose, the sugar breaks down into glucose and other components as it is heated; whereas during the melting process, the chemical identity of a substance stays intact as it changes state.

This decomposition can begin almost instantaneously if the sugar is at a high heat, but can also occur at selected lower temperatures over longer periods of time.

And that means sugar can be caramelized over a range of temperatures.

Schmidt says the Willy Wonkas of the world can benefit from this information, because they will no longer have to rely on high-heat recipes to make their caramels.

“Now you’re stuck with whatever the high-temperature reaction gives you,” says Schmidt.

“So in addition to nice-tasting compounds, you get bitter compounds and ones that are less desirable, but you’re kind of stuck with those.”

Schmidt says there have been hints over the years that caramels could be created at different temperatures, but they were often dismissed because of the belief that sugar melts.

“It was out there, it wasn’t like people didn’t notice it,” she says.

A better understanding of this science will help candy-makers “optimize” the flavour profiles of the caramels they make, or possibly create new ones, by heating their sugar at lower temperatures.

“Like new flavours, like new hints of a caramel flavour that is different because now you can do it under different conditions,” says Schmidt.

Scott Birss, a Toronto-based chocolatier, says it is news to him that sugar can be caramelized at lower temperatures. But he sees the applications for confectionary creators.

“So caramels that are cooked more tend to be more bitter, but they also have a stronger flavour and some people prefer that. So I suppose that if you could fine-tune that process, if you could control it at a lower temperature, it would be hugely beneficial.”

Schmidt says the advent of being able to caramelize sucrose at lower temperatures over a longer period of time might not be very useful for large-scale candy manufacturers who rely on producing product as quickly as possible.

With the early scientific literature suggesting that low-temperature caramelization takes significantly longer than the existing high-temperature process, Birss says candy-makers will have to decide whether a longer production process is worthwhile financially.

“It’s something that individuals will have to weigh, to see how much time it takes and how much it improves their product. And there will be a value judgment to be made based on the benefits,” says Birss.

The many faces of sugar when making candy

Sugar can take on many textures as it is heated, which are used to make different types of candy.

There are several stages that sugar reaches when it is being boiled, which are known by the following descriptive names: