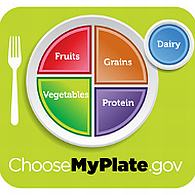 The Agriculture Department says “My Plate,” its new healthy eating symbol, aims to show that nutrition doesn’t have to be complicated.

“My Plate” — a simple circle divided into quadrants that contain fruits, vegetables, protein and grains — will replace USDA’s food pyramid, which has been around in various forms since 1992. It comes with an accompanying website.

USDA officials say the pyramid was tired out, overly complex and tried to communicate too many different nutrition facts at once. The new symbol, unveiled Thursday at the department with first lady Michelle Obama in attendance, is simple and gives diners an idea of what should be on their plates when they sit down at the dinner table.

“It’s grabbing the consumers’ attention that we are after this time, not making it so complicated that perhaps it is a turnoff,” said Robert Post of USDA’s Center for Nutrition Policy and Promotion. “There is something really inviting about this familiar setting for meal time.”

The department is planning to use social media as one way of grabbing attention, posting advice every day on Twitter, for example. The accompanying website, choosemyplate.gov, will be written on the chart. It will eventually feature interactive tools that help people manage their weight and track exercise.

Post, who has spent two years developing the plate and the website, said the new chart is designed to be “more artistic and attractive” and to serve as a visual cue for diners.

Gone are any references to sugars, fats or oils, and what was once a category called “meat and beans” is now simply “proteins.” Next to the plate is a blue circle for dairy, which could be a glass of milk or a food such as cheese or yogurt.

Even though the plate is divided into four sections, the servings aren’t supposed to be proportional. Every person has different nutritional needs, based on age, health and other factors. The symbol, based on a new set of dietary guidelines released in January, is a general guideline.

The dietary guidelines that provide the foundation for the symbol are released every five years. In addition to telling people to drastically reduce salt and continue limiting saturated fats, the most recent set of guidelines asked diners to enjoy food but balance calories by eating less and taking smaller portions. It also suggested making half of your plate fruits and vegetables, a message easily translated on the dinner plate.

“Our approach here is to make it very simple,” says USDA’s Post. “One icon cannot deliver everything a consumer needs to know.”