Two days of competition have just ended at the CREMAI Show in Casablanca, with the Africa Mediterranean International Selection Round. The Senegalese team is proudly heading for the Coupe du Monde de la Boulangerie (Bakery World Cup), which will be held in Paris in 2012, hosted by the Europain Show.

This was the first time the CREMAI Show had hosted the Louis Lesaffre Cup. Four countries competed from 22nd to  24th March: Morocco, Algeria, Senegal and Turkey. Each team was composed of three candidates, working in three categories: Bread, Viennese Pastry and Artistic Piece.

The competition proceeded in a very friendly atmosphere,especially between the candidates. Like a fraternity, the candidates from the different countries forged close relationships. The two days were filled with meetings, discoveries and discussions. And Senegal only snatched victory from Morocco by just a few points, so Morocco has won a place as a challenger team. After the Americas, Europe and Africa Mediterranean zones, we are now leading up to the final stage of international selection rounds, the Asia zone, from 26th to 28th May, where seven teams will be in the running. 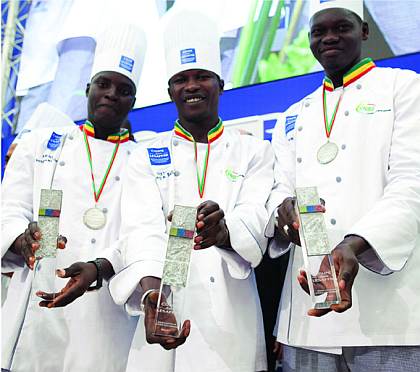 The Senegalese team only had two months to train, after their work.  This is the second time the team has participated in the Louis Lesaffre Cup, giving the candidates the opportunity to test their abilities and express their know-how. The team used local products in a resolutely modern bakery. During the competition, the candidates rose to the occasion and handled their stress with aplomb. Supported by a large number of fans, the candidates met the challenge. The Consul General of Senegal had made the trip specially to support the team. This victory brought them enormous joy and great pride, which they expressed according to local folklore, with a combination of dancing and good humour.

When they arrived back in Senegal, a welcoming committee was already waiting at the airport, with the main street of Dakar closed for a celebration parade by the team. This is the first time that a team from Black Africa will take part in the Coupe du Monde de la Boulangerie … A historical event!