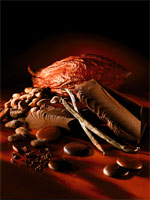 In time for the chocolate-giving and chocolate-noshing fest on Valentine’s Day, scientists are reporting discovery of how this treat boosts the body’s production of high-density lipoprotein cholesterol (HDL) — the “good” form of cholesterol that protects against heart disease. Just as those boxes of chocolates get hearts throbbing and mouths watering, polyphenols in chocolate rev up the activity of certain proteins, including proteins that attach to the genetic material DNA in ways that boost HDL levels. Their report appears in the Journal of Agricultural and Food Chemistry, one of 39 peer-reviewed scientific journals published by the American Chemical Society.

Midori Natsume, Ph.D., and colleagues note that studies have shown that cocoa, the main ingredient in chocolate, appears to reduce the risk of heart disease by boosting levels of HDL, or “good” cholesterol, and decreasing levels of low-density lipoprotein (LDL), or “bad” cholesterol. Credit for those heart-healthy effects goes to a cadre of antioxidant compounds in cocoa called polyphenols, which are particularly abundant in dark chocolate. Until now, however, nobody knew exactly how the polyphenols in cocoa orchestrated those beneficial effects.

The scientists analyzed the effects of cocoa polyphenols on cholesterol using cultures of human liver and intestinal cells. They focused on the production of apolipoprotein A1 (ApoA1), a protein that is the major component of “good” cholesterol, and apolipoprotein B (ApoB), the main component of “bad” cholesterol. It turns out that cocoa polyphenols increased ApoA1 levels and decreased ApoB levels in both the liver and intestine. Further, the scientists discovered that the polyphenols seem to work by enhancing the activity of so-called sterol regulatory element binding proteins (SREBPs). SREBPs attach to the genetic material DNA and activate genes that boost ApoA1 levels, increasing “good” cholesterol. The scientists also found that polyphenols appear to increase the activity of LDL receptors, proteins that help lower “bad” cholesterol levels.