Green Gables, a bakery in rural Japan, has an interesting item on the menu — an iPhone, an iPhone cookie, that is. 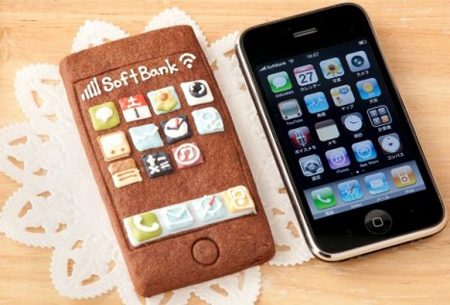 In 2008, Green Gables owner Kumiko Kudo, 44, was commissioned to make a cookie that resembled an iPod Touch. Kudo’s edible creation ended up looking more like an iPhone, but the customer didn’t seem to mind. Since then, the bakery has been making hundreds of the Apple-inspired cookies, especially after Japanese economist Kazuyo Katsuma recently tweeted a photo of the “amazing iPhone cookie” and sent it viral. The tweet spurred interest and salivation among readers and tech geeks worldwide.

The chocolate cookie features highly detailed glazed “apps,” including SMS messaging, a calendar, iTunes and YouTube. The cookies are a bit larger than an actual iPhone and they sell for 2,730 yen (approximately $33) a pop. Kudo says she can only bake and ice 20 cookies per day, because of the time-consuming attention to detail.

“It is totally surprising to have such a big reaction,” Kudo said. “At first, the cookie was made just to meet a friend’s request and I had no intention of receiving additional orders.”

The viral images have given SoftBank — the exclusive iPhone carrier in Japan — some free advertising, and Kudo gave one of the iPhone cookies to SoftBank’s CEO, Masayoshi Son.

The hand-made iCookie doesn’t come cheap at 2,730 yen (33 dollars), and is only available by order and inside Japan, where the waiting time to snap up one of the biscuits has been as long as two months.

Kudo has received requests for iPad cookies, but she says they are “too big, heavy and difficult to make.