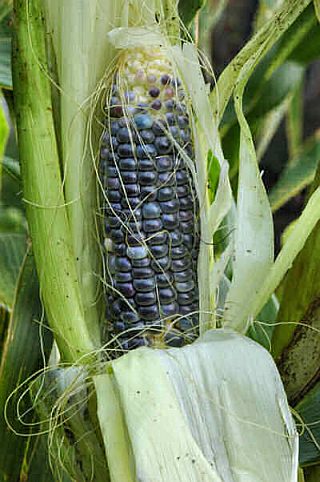 The authors, who published their findings in the Journal of the Science of Food and Agriculture, found that blue corn-containing cookies baked with citric acid in a convection oven retained the maximum total anthocyanin content (TAC).

“Cookies serve as a satisfactory model for baked food systems to demonstrate how manipulating ingredients and processing conditions can improve anthocyanin retention yet retain acceptable cookie properties,” concluded the researchers.

The authors explained that blue corn (maize) contains high levels of anthocyanins – pink to purple water-soluble flavonoids that are naturally occurring pigments in many fruits and red wine and have claimed health benefits.

In both in vitro and in vivo studies, anthocyanins tend to reduce cancer cell proliferation and inhibit tumour formation, report the team, who added that research has demonstrated that anthocyanins also protect against cardiovascular disease.

However, anthocyanins are sensitive to degradation by high pH, light and temperature, and the researchers said the focus of their study was thus on how pH changes (acidulents) and oven type affect the residual anthocyanin content of cookies containing blue corn.

A cookie formula with a high level of blue corn was developed with added acidulents including citric acid, lactic acid and glucono-?-lactone (GDL) and baked in ovens with different heat transfer coefficients.

An electric reel oven, a gas forced convection oven and an electric impingement oven were used to bake the cookies.

Acidulents were added to lower the pH in the cookies and reduce the decomposition of anthocyanins during baking.

Generally, the convection oven was more efficient in baking and retaining TAC in the blue corn cookies than was the reel oven.

“If the cookies were baked at 177°C for 7 min (TAC 130 mg kg?1) in the convection oven, the TAC remaining in the cookies was higher than when baking at the same temperature in the reel oven (115 mg kg?1),” found the researchers.

They said that this factor was explained by the higher heat transfer efficiency in the convection oven, which allows more heat-sensitive anthocyanins to survive during the shorter time.

“Based on product properties (diameter spread and surface character), 182°C and 4 min were identified as the baking conditions to retain both maximum TAC and the desired cookie characteristics,” concluded the team.

They added that GDL, citric acid and lactic acid all increased residual TAC in both the cookie dough and the final cookies but citric acid, with three replaceable hydrogen ions, retained the highest level of anthocyanin content in the cookies.

And the researchers maintain that the same procedure can be used to increase residual natural source antioxidants in other baked foods.

Source: Journal of the Science of Food and Agriculture