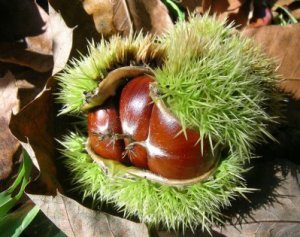 If swallows announce the coming of spring and summer, then chestnuts are the heralds of autumn and winter, though roasted chestnut vendors continue to peddle their wares well into May and June. One, in Rome’s Piazza di Spagna, kept his brazier going through the hottest days of 2010. More than a seller of street snacks, he seemed like a walking ad for Sestriere or the glaciers of Livrio, an enticement to enjoy the last gasp of winter sports.

Chestnuts and chestnut trees have a tortuous history. Botanists recall the so-called Tree of One Hundred Horses, on Etna, 68 metres in circumference and 3000 years old. But there is also a fine specimen in Piancastagnaio, Tuscany, that towers to 22.3 metres. In Camugnano, in the Bologna Apennines, is a tree whose trunk has been made into a little osteria, obviously equipped with greater comfort than the colossus of Etna with its hundred horses. And it was under a spreading chestnut tree that Pope Pius Il Piccolomini dictated his papal bull.

It’s truly the tree of bread, as mountain dwellers have depended on its fruit for sustenance for centuries, whether boiled, roasted or dried (cooked slowly in water and called mosciarelle).

Chestnut flour is used in cakes (castagnaccio), flatbreads (pattona) and humble chestnut patties (mistocchine). Until the end of World War II, you could still see mistocchine being made under the porticoes in Bologna: a flat patty of chestnut meal moistened with a few drops of water and grilled on a hotplate, poetry for the palate but now lost in the shuffle of progress. Necci are like filled crepes, stacked one on top of the other to mask the first whiff of mould, thanks to the Pyrex dishes used to make them. Chestnuts were so precious among medieval populations (and even up until WW II) that townships where they were grown issued strict regulations about how they were to be harvested. The fruit had to be guaranteed first by the landowner and then by the gatherers in the same township. Last came the outsiders, whom we would call tourists today. Not a gram was to be wasted, and in 1360 the community of Barga, in upper Garfagnana, banned the export of flour, a restriction it imposed later for cereals.

Mario Adua, of ISTAT, calculates that there are roughly 1000 recipes using chestnut flour. It may not be possible to taste them all, as production has fallen from 8.3 thousand quintals in 1911 to 326 in 2008, though with large surges and drops from one year to the next. Growers hopeful of a slight recovery at the end of the last century were disappointed. But next winter, when you dig into a generous slice of Mont-Blanc, with its luscious base of chestnut puree, remember that the history of this fruit is linked to some of the most tormented pages of Italy’s past. In the late 1800s, when ink disease and the tannin industry threatened the fragile livelihood of Italy’s mountain folk, the inhabitants of Garfagnana abandoned their centuries-old fruit and made do selling crèche figurines on the streets, from city to city in far-off America. The writer Pascoli immortalised them: “Will you buy…from Chicago to Baltimore, / buy images…in Troy, Memphis, Atlanta, / in a voice that breaks your heart: / cheap?”.