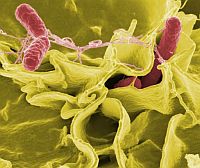 A study has revealed that a rapid egg cooling system could cut salmonella illnesses.

The process, which uses carbon dioxide to create of a thin ice layer inside the shell, can also be used to extend egg shelf life to up to 12-15 weeks, according to Purdue University associate professor Kevin Keener.

Keener said that under present industry practices it can take up to six days for eggs to cool to 45F (7C), the temperature at which salmonella can no longer grow.

The eggs reach nearly 100F (38C) after being washed and packaged in cartons.

According to an estimate, one in every 20,000 eggs has salmonella.

The US Food and Drug Administration earlier found if eggs were cooled and stored at 45 degrees or less within 12 hours of laying, there would be an estimated 78% fewer salmonella cases from eggs in the US each year.