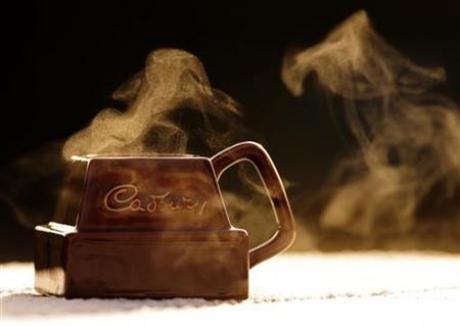 The head of Kraft Foods said she was not concerned by top investor Warren Buffett’s decision to cut his stake in the U.S. food group after criticizing her acquisition of British chocolatier Cadbury.

The integration of Cadbury is on track and benefits from the $18.4 billion deal will become clear to shareholders, Chairman and Chief Executive Irene Rosenfeld told Reuters on Friday.

“I will say that for Mr Buffett as well as for all our shareholders, in the coming months we will continue to deliver against the targets we have laid for ourselves. These results will speak for themselves,” Rosenfeld said.

With a market value of $53 billion, Kraft, the maker of Oreo cookies and Philadelphia cream cheese, is the largest North American food maker and the world’s second biggest behind Nestle.

Buffett has said in the past that when a company made an acquisition he bought two greeting cards, a congratulatory card and a condolence card and waited five years to decide which card to send, Rosenfeld said.

“What I have said to him is that I am quite confident he will be sending me a congratulatory card and it will be in far less than five years,” she added.

The deal gives Kraft additional confectionery businesses which are growing faster than its core food and beverage brands like Maxwell House coffee and access to emerging markets like India.

Buffett’s Berkshire Hathaway previously owned 9.4 percent of Kraft, making it the largest shareholder. But since the beginning of the year Berkshire has sold down its stake to 106.73 million shares, giving it 6.1 percent of the shares in issue as at the end of April, according to regulatory filings and Reuters data.

Buffett said Rosenfeld had paid too much for Cadbury and called the recent sale of Kraft’s frozen pizza business to Nestle “particularly dumb.”

But Kraft has set a goal for at least $675 million of annual cost synergies from the deal by the end of the third year.

“We are well on our way to deliver those,” she said, adding the integration was “progressing extremely well” .

Meanwhile the sale of Cadbury’s Polish and Romanian businesses, which Kraft must sell for competition reasons, is likely to happen in the next six months, and there are a number of interested buyers, she added.

Earlier this month Kraft posted higher than expected first-quarter revenues, helped by the Cadbury acquisition and growth in emerging countries, but forecast 2010 earnings per share that were below analyst estimates, raising concerns over how smoothly Cadbury can be integrated.

Rosenfeld acknowledged there would be redundancies but said the group would not commit to a global figure as decisions would be made country by country and left to the local managers.

In Britain Kraft’s handling of the takeover drew criticism after it said in February it would shut Cadbury’s Somerdale confectionery plant in western England with the loss of 400 jobs.

This decision came despite Kraft suggesting during the takeover battle that it might be able to keep the factory open. Kraft has committed not to make any further manufacturing redundancies for the next two years in Britain.

In March, Kraft completed the $3.7 billion sale of its pizza business to Nestle to help fund the Cadbury deal.

Asked if Kraft could exit other businesses, Rosenfeld said: “I feel very good about the portfolio today. I am quite confident the targets we have laid out for growth both for the top and bottom-line we can deliver with the portfolio as we know it today.”

She said she would continue to look at opportunities over time to ensure all assets contributed to the group’s growth.

Apart from integrating Cadbury, Kraft, like other food companies, has to grapple with soft consumer spending, rising commodity prices and volatile currencies.

It expects commodity costs to rise by between 1 and 2 percent this year but Rosenfeld said these costs should be manageable within the group’s overall plan.

Kraft, which now makes 51 percent of revenue outside North America, was also closely watching the currency situation in Europe, notably the weak euro.

Rosenfeld was in Paris for the start of building an biscuit research and development center in Saclay, Paris, where Kraft is investing 15 million euros. Kraft spends over 1 percent of its global turnover on R&D.

Kraft, which bought the biscuit business of Danone in 2007, is the global leader in the $60 billion biscuit market.