The inclusion of resistant starch (RS) and fibre blend in bake-off bread formulation induces a reduction in the specific volume of the bread and an increase of hardness while pectin negatively impacted on crumb structure, according to research from Spain published in the Journal of Food Engineering.

The researchers examined the technological functionality of different fibres such as high methylated ester pectin, resistant starch and insoluble-soluble fibre blend in partially baked breads stored either under sub-zero or low temperatures, in order to assess their possible role as bread-making ingredients in bake-off technologies (BOT).

The researchers maintain that, in recent years, BOT or interrupted technologies are becoming a common practice for big bakeries, as they allow manufacturers to meet increasing consumer demand for convenience orientated products, and enable all day availability regarding baked goods.

The authors, based at the Institute of Agrochemistry and Food Technology in Valencia, report considerable scientific research backing the beneficial role of dietary fibre in reduction of cardiovascular disease, certain forms of cancer and constipation, and they note, as a result, the increasing growth in fibre-enriched cereal based products.

And the researchers said they sought to determine the effect of various biopolymeric ingredients such as high methylated ester pectin, resistant starch, and insoluble-soluble fibre blends on specific volume, texture, crumb structure and crust flaking of bread obtained from the BOT process.

In terms of method, doughs were prepared by mixing ingredients in a spiral mixer for nine minutes. After 10 min resting, dough was divided into 70 g pieces and hand moulded. Fermentation was carried out in a proofing cabinet at 35° C and 95 per cent relative humidity for one hour.

For the conventional process, continued the authors, complete baking was carried out in a deck oven at 23°C for 20 minutes with steam injection at the beginning of the baking. Partial baking was carried out at 170°C for 16 minutes, and then loaves were cooled down at 25°C for 30 minutes, with the temperature of the bread core around 30°C.

Technological parameters were evaluated during the storage period with samples taken after one, two and three months in PBF or after three, seven and 10 days in PB, said the authors. 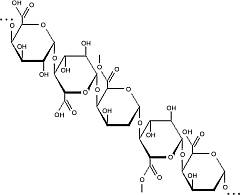 The authors found that technological functionality of pectin was negatively affected by the BOT process.

The inclusion of resistant starch (RS) and fibre blend in the bread formulation induced a reduction in the specific volume of the bread and an increase of crumb hardness in conventional and BOT methods.

The researchers said that while pectin is a good breadmaking improver for the conventional breadmaking process, it seems pectin’s polymeric structure “is not strong enough to keep crumb structure when contractions after partial baking and cooling occur and final baking does not allow recovering volume.”

And they noted that par-baked bread is submitted to tensile stresses in response to the compression of gas phase during cooling, being very sensitive to stresses associated to final baking.

They authors explained that insoluble fibres prevent the free expansion of dough during fermentation, and also they can induce an early fixing of the structure due to their higher water content.