Mixing of powders in a batch mixer generally is not so straight forward as mixing gasses or liquids. 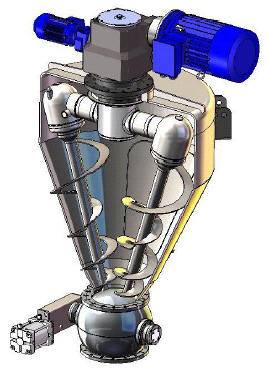 Because of cohesive, free flowing and agglomeration characteristics of powders, mixing can be quite complex. Add to this the introduction of liquids into the mixture and all too often lumps are created causing unevenness in the mixture leading to the need for an additional de-lumping process.

The new Vitomix mid shear mixer from Hosokawa Micron makes adding liquids to powder mixtures a ‘piece of cake’. There is no requirement for lump breakers and mixing times are reduced maintaining low energy consumption. It can combine both gentle low shear mixing with mid shear mixing, for reduced overall mixing times.

Based upon the high efficiency Vrieco Nauta range of conical blenders the Vitomix uses a double screw combination, which, coupled with their large diameter, means that the transport capacity is up to eight times higher then the original Vrieco Nauta series.

The high rotational speeds create a fluid bed at the top of the mixer into which liquids can be introduced. The ratio of liquid, powder and air results in a homogenous powdery material containing liquids, fats or oils without any lumps. Therefore lump breakers are not needed, which would normally be created with other types of mixers when liquids are injected into powders.