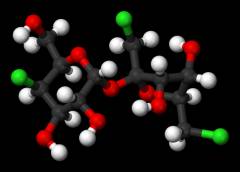 Bakery formulators who use ingredients like glycerol or fats should exercise caution when using sucralose, suggests a new study from Canada.

Researchers from McGill University report that the chloride in sucralose may chlorinate glycerol to produce chloropropanols; potentially toxic compounds. However, questions remain as to whether such compounds would be formed in actual foods.

Speaking to FoodNavigator, lead researcher Dr Varoujan Yaylayan from McGill’s Department of Food Science and Agricultural Chemistry said that the purpose of the new study was to “show in principle” that chloropropanols could be formed if food is heated at high temperatures.

“Food matrix components may promote or hinder this process,” he said. “In order to confirm positively that this reaction can happen under realistic food processing conditions specific experiments should be conducted.

“Our aim was to identify if chlorination in principle can occur,” he added.

According to their results, published in the journal Food Chemistry, sucralose may degrade in the presence of glycerol and generate chloropropanols.

“Caution should be exercised in the use of sucralose as a sweetening agent during baking of food products containing glycerol and or lipids due to the potential formation of toxic chloropropanols,” they added.

The study’s findings were dismissed by sucralose supplier Tate & Lyle as “unrealistic”. A spokesperson for the company told FoodNavigator that the stability of the ingredient, including its stability under heat processing, was rigorously tested as part of the original regulatory petition that submitted and reviewed by regulatory authorities around the world.

“All of these tests proved that sucralose does not break down in typical food processing conditions,” said the spokesperson. “These tests were conducted with actual food products including baked goods.”

The spokesperson added that the conditions used in the McGill study were “wholly unrealistic compared to how sucralose is used within a food matrix.

“It is not scientifically plausible to extrapolate from these tests that this is how sucralose behaves in normal food processing conditions.

“Indeed, the process and shelf stability of sucralose is one of the many reasons why it is the leading high intensity sweetener in the food market and sweetens more than 4000 products world wide,” added the spokesperson.

The new study, funded by the Natural Sciences and Engineering Research Council of Canada (NSERC), sought to understand the thermal decomposition of sucralose under high temperature environments. Drs Yaylayan and Rahn also studied the “consequences of hydrogen chloride release from sucralose and its ability to chlorinate various food related ingredients such as glycerol to generate chloropropanols”.

The researchers looked at the thermal degradation of sucralose (pyrolysis) at 250 °C in the presence of glycerol “generated significant amounts of 3-monochloropropanediol and 1,2- and 1,3-dichloropropanols based on the relative intensities of their chromatographic peaks which amounted to 15 per cent of the total chromatographic peak area”, they reported.

Dr Yaylayan told this website that the choice of 250 °C was “a little bit higher temperature” than found in many food processes “in order to speed up the reaction”.

A growing concern for foods

Chloropropanols are found in many types of food, said Dr Yaylayan, and that their work was continuing to study chloropropanol formation mechanisms in general, and not specifically sucralose-related.

According to a 2009 report from the International Life Sciences Institute (ILSI), the major chloropropanol is 3-chloro-1,2-propanediol (3-MCPD). It is known to be present in some bakery products. “3-MCPD is formed when fat- and salt-containing foods are processed at high temperatures during production,” explains the report. Dr Yaylayan worked as co-author on the ILSI “3-MCPD Esters in Food Products” report (to read the ILSI report, please click here .)

The safety of sucralose was supported in a recent review paper by an expert panel and published in the Regulatory Toxicology and Pharmacology (Oct. 2009, Vol. 55, pp. 6-12).

The expert panel was convened “because the general public continues to be concerned about the safety of food ingredients, including non-nutritive and nutritive sweeteners, it is important that all safety data regarding food ingredients be made publicly available, and the data should be critically evaluated to assure the public that the conclusions presented are supported by data from properly designed and executed studies,” said the article.

“The extensive safety data of sucralose and maltodextrin have been rigorously evaluated by experts around the world, and the available evidence demonstrates that Splenda, sucralose, and maltodextrin are safe for their intended uses.”