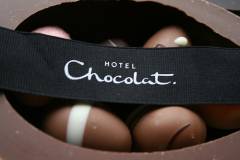 Hotel Chocolat, the 42-store luxury chocolatier, has revealed that its underlying sales rocketed by 14 per cent in the second half of 2009 and that it will open its first stores in the Middle East next month.

Angus Thirlwell, the co-founder and chief executive of Hotel Chocolat, said the sales uplift had been driven by a sharper focus on buying and merchandising, as well as “product innovation”. He added that its H2 sales momentum had been maintained throughout the crucial festive trading months of November and December. The chain will open two stores in Kuwait and Bahrain in February, followed by a further store in Dubai in March, all through its franchise operator Jawad Business Group.

Mr Thirlwell also said that Hotel Chocolat, which has two stores in Boston, US, sees an opportunity to tout its UK manufacturing credentials in the wake of Kraft’s successful take-over approach for Cadbury. He said: “We plan to tap into the heightened interest in British chocolate, following the Kraft bid for Cadbury.”

The majority of Hotel Chocolat’s chocolate is manufactured at its factory in Huntingdon, Cambridgeshire, where it has created 500 jobs over the past three years. While it developed the phrase before Kraft formally kicked off its bid for Cadbury in September, Hotel Chocolat is pushing its tag line – British cocoa grower and chocolatier – underneath its logo on products.